IIF: IMF meetings, not as bad as you think 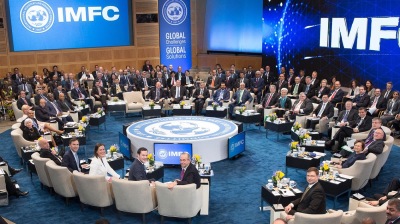 Fears of a global recession receded somewhat after the IMF, World Bank annual general meeting as the news is not as bad as it seems
By Elina Ribakova Deputy Chief Economist of the Institute of International Finance et al October 27, 2019

Accommodative central bank policies and the recent US-China truce should help risk sentiment. Most participants believed that fiscal stimulus was needed, but no consensus was reached in terms of which countries would deliver it.

As we argue in our Capital Flows Report, this environment supports a modest pickup in flows to EM. Portfolio debt flows rose in several EMs despite a lower growth differential to developed markets (Exhibits 1 and 2).

Attractive real rates explain some of these dynamics (Exhibit 3). In this note, we take a closer look at select countries in the CEEMEA region: Russia, South Africa, Turkey, and Ukraine.

During the meetings, the IMF’s proposal for an integrated policy framework (IPF) was much debated by authorities but attracted surprisingly little attention from investors. Once adopted, it could be an important departure from the IMF’s historically orthodox advice on capital flows. The IPF would allow for a more liberal use of FX and capital flow management techniques in countries with market dislocations (e.g. dollarization) and shallow domestic markets. Some EM central banks worried that the IPF could undermine their credibility and intensify political pressure to deliver growth.

Russia’s conservative central bank and continued fiscal prudence remain attractive to investors. The country continues to benefit from exceptionally low macro vulnerabilities, and the breakeven oil price for both external and fiscal balance is low.Investors appear more comfortable with the sanctions risk, as renewed inflows into domestically-issued government debt show. While we believe that the OFZ market is unlikely to be targeted in the near term, we are paying close attention to whether a new bill could consolidate current initiatives (DAASKA and DETER) and whether additional measures will be introduced into the NDAA during conference.

On South Africa, our key takeaway is that the government is likely to announce sizable spending cuts in the MTBPS on October 30, and perhaps a plan to transfer ZAR250 bn of Eskom’s debt to the central government. Moody’s will likely need some time to react and, as a result, there will be no rating or outlook decision on November 1. At the same time, Eskom's situation is far from clear. We expect the authorities to release a restructuring plan for the struggling utility company before the MTBPS date. The SARB remains the bright spot. Its credibility is undisputed, and the central bank is committed to a flexible exchange rate, while inflation effectively lies in the middle of the 3-6% target band (Exhibit 4).

Regarding Turkey, the key takeaway is that investors expect no further escalation of tensions with the US. Normalization of geopolitical risks together with a moderately improved growth outlook for 2020 (most expect 2-3% growth in 2020 compared to near zero in 2019) should allow for some capital inflows. Most observers expect that growth concerns will prompt the CBRT to cut interest rates once more on October 24 (100-150bps), despite intensified depreciation pressure on the TRY (which is likely sanctions related).

Little clarity emerged regarding Ukraine’s IMF program. We still believe that an agreement is possible before the end of the year, and the IMF will visit Kyiv again in November. However, a court decision on PrivatBank has been postponed once again, and the issue represents a key sticking point in the negotiations. Ukraine has enjoyed a surge of non-resident flows in domestically issued debt since the beginning of the year, and its immediate repayment needs are covered for the coming months (Exhibit 6).

We expect moderate capital flows to EM to continue in the context of accommodative monetary policy, a possible resolution of the trade conflict between the US and China, and yield-seeking behavior from investors. Nevertheless, geopolitical factors will play an increasingly important role for the outlook.