Hungary to start gradually lifting restrictions as 2.5mn get the COVID-19 jab 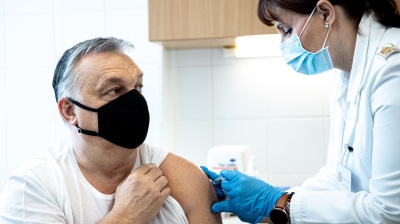 Prime Minister Viktor Orban previously designated this number as the requirement for the automatic start of Hungary’s gradual reopening. On Tuesday night, he came on social media to announce the new measures.

The government decree approved in late March will shorten the nighttime curfew by two hours from 10 pm until 5 am. It will extend business hours to between 5 am and 9:30 pm.

Businesses forced to shut down on March 8 will be allowed to reopen, including hairdressers and beauticians, with the stipulation that the number of customers must be limited to one for every 10 square meters. Dining in at restaurants and recreational stays at hotels are still banned.

In the second stage of Hungary’s reopening, schools and kindergartens will re-open on April 19 after staff have been inoculated.

Many epidemiologists warned that it is too early to lift restrictions as Hungary continues to report the worst fatality rates on the globe per 1mn inhabitants. The rolling seven-day average of COVID-19 deaths per 1mn peaked at 26 earlier this month, five-fold the EU average.

Despite closing shops and schools from March 8, negative records were broken on a daily basis. Last month, daily new cases began steadily rising, setting a new record on March 26 with 11,265 new infections, a three-fold increase from March 1. Since mid-March, Hungary posted the highest infections per capita in Europe.

Hungary surpassed 10,000 coronavirus-related fatalities in early January and it took about two months to surpass the 15,000 mark. By the end of March the death toll neared 20,000 and as of Tuesday, it topped 22,000.

The number of Hungarians inoculated could reach 3mn by Apirl 13, "allowing a new opportunity for people to return to their earlier ways of life", Orban told public radio on Good Friday. The next step in easing will be taken when the vaccinated number reaches 3mn-3.5mn.

By the end of April Hungary could vaccinate everyone registered (3.7mn-3.8mn). In fact there could be huge stocks of unused vaccines as deliveries pick up this month. Hungary is to receive some 8mn vaccines under the EU’s joint procurement scheme in Q2, of which Pfizer alone would ship some 4.5mn doses in the April-June period.

According to a survey conducted by the Central Statistics Office at the end of March,  56% of respondents want to be vaccinated, while 19% had not decided yet. This ratio is not enough to achieve herd immunity, experts warned.

Roughly 60-65% of the population would need to get at least the first jab to achieve herd immunity, but due to more infectious viral mutants this ratio is closer to 90%, Hungary’s leading epidemiologists said. The figure includes those who had contracted the disease. The official number of people who were infected stands at 700,000.

Hungary started its vaccine rollout the day after Christmas, first inoculating healthcare workers, then nursing home residents and staff, and then the over 65. The inoculation rate of this age group is now 90% and 25% of people received at least the first shot. This ranks Hungary number one in Europe per capita, twice the EU average. The government claims that this is due to the purchase of Russian and Chinese vaccines.

Hungary to finance Fudan University with €1.4bn from Chinese loans