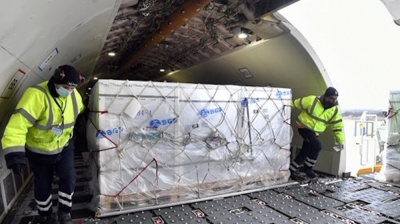 The first shipment of 550,000 doses of vaccine by Sinopharm land at Ferenc Liszt International Airport on February 16.
By bne IntelliNews February 16, 2021

Hungary received the first shipment of Sinopharm on February 16 as it prepares to be the first EU country to use the Chinese vaccine against COVID-19.

The government has slammed Brussels for the slow rollout of vaccines and was the first EU member state to turn to Chinese and Russian manufacturers to speed up vaccinations.

In late January the government agreed with China on the delivery of 5mn doses of Sinopharm’s drug in four phases. According to the agreement China would deliver 500,000 doses in February, March and April and a further 3.5mn in May. On February 16 it actually received 550,000 doses.

Earlier this month Prime Minister Viktor Orban said that Hungary plans to inoculate every Hungarian over the age of 60, or 2mn by mid-April. Without Chinese and Russian vaccines the reopening of the economy would be delayed, he added.

Hungary has secured a total of 19.7mn doses from western manufacturers, including AstraZeneca, Moderna and Pfizer-BioNTech, which would be enough to provide immunity to the 9.8mn population.

On Tuesday, the National Public Health Centre (NNK) said that Sinopharm’s first shipment will enter Hungary's vaccine mix after it has been tested and approved for use.

The agreement with the Chinese manufacturer came a day after the government issued a decree allowing authorisation for any vaccine that had been administered to at least 1mn in at least three other countries.The legislation made it possible to circumvent requiring an authorisation from the Hungarian National Institute of Pharmacy and Food and Health (OGYEI), which gave its blessing to the Sinopharm drug days later.

The lack of transparency surrounding the authorisation of the Chinese vaccine has triggered a heated political debate in Hungary.

Hungary’s largest opposition party, Democratic Coalition (DK) turned to the minister of human resources with the demand that only vaccines approved by the European Medicines Agency (EMA) be used in Budapest districts with DK mayors.

The ruling Fidesz party argued for procuring vaccines outside the EU and even without the blessing of EMA to prevent a third wave of the epidemic, which is spreading across Europe. Countries were working against the clock to obtain vaccines competing with each other, it said.