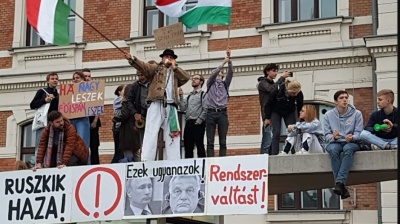 Some 80,000 people took to the streets on October 23 in Budapest. Protesters' banners from left to right read: "Russians go home", "they are the same" and "new regime change". (source: Facebook) / bne IntelliNews
By bne IntelliNews October 24, 2022

Tens of thousands of protestors gathered in central Budapest for the largest anti-government demonstrations in years demanding better working conditions and higher wages for teachers on October 23, marking the 66th anniversary of the anti-Soviet uprising. Prime Minister Viktor Orban, breaking with tradition, held his annual commemoration outside the capital, seen by many commentators as "fleeing" from protests.

Since the change of regime, Hungary’s most important national holiday has been heavily politicised. A year ago, the ruling party held a mass rally drawing 100,000 to kickstart the election campaign. Fidesz eventually sealed the April election with the largest margin ever, leaving the opposition in disarray.

On the national holiday this year, streets in Budapest's central districts with filled with a diverse crowd of young and middle-aged people angry at the government’s policies. It was the latest in a sustained wave of protests by Hungarian teachers and students that began earlier this month. In early October some 40,000 people took to the street, blocking a bridge in Budapest after officials from a Budapest central school district fired five teachers from a high school for staging a two-hour work stoppage.

Sunday’s protest was organised by students' groups and unions, including the largest teachers union PDSZ, as opposition parties stayed out of it after the government labelled PDSZ as campaigning for the "left".

The crowd gathered at the National Museum and strolled through Liberty Bridge to the quay in front of the Budapest University of Technology and Economics. People chanted "we want our teachers back", and "there is no future without teachers" and banners with funny or even foul language criticised the government and its pro-Russian stance. The slogan of the 1956 revolution "Russians go home" was also displayed on many banners.

"Your future is at risk because of low wages of teachers," PDSZ leader Erzsebet Nagy told the audience, adding that 16,000 teachers missing from nurseries and schools and that a fifth of schools were staffed by teachers without qualifications.

As a consequence, children's right to education is being violated, she added.

Spending on secondary and elementary education in terms of GDP is below the OECD average and teacher salaries are some of the lowest in the EU, less than two-thirds of the salaries of other tertiary graduates in Hungary, according to the EU’s country report. Career starters' net wages start from €500 per month. Some 10% of positions are vacant, and the situation in poor rural areas is critical.

The shortage of teachers will become even more acute as the average age of staff is high. While thousands retire each year, only hundreds of young people start university each year due to the high workload and poor wages.

The solidarity movement for teachers gained momentum earlier this month after officials from a Budapest central school district fired five teachers from a Budapest elite high school for staging a two-hour work stoppage, saying the move "endangers students' rights". A government decree in February made striking effectively impossible for teachers. Teachers have held "disobedience movements" in many schools since then.

Sunday’s protest was not only much larger in size but also showed marked differences as other union leaders showed up and expressed solidarity for teachers. The tone of protestors was harsher than at previous protests. At the end the crowd shouted "Orban get out",  "dirty Fidesz" and the slogan of 1956 revolutionaries, "Russians go home".  According to the organisers, the solidarity movement will continue in the future with more protests in the pipeline. Students are planning to form a human chain spanning most of Budapest’s main road, some 10 km long, this week.

Fidesz held no central commemoration this year and for the first time it was held outside the capital.

Orban’s decision to hold his speech at Zalaegeszeg, western Hungary, at the inauguration of a visitors’ centre dedicated to the late Cardinal Jozsef Mindszenty came as a surprise. Orban has fully exploited big rallies, which also provided his loyal fans with a sense of unity. Some analysts argued that Orban was not risking holding a central rally in light of the war in Ukraine, as he would have to draw comparisons between Hungarians fighting for liberty in 1956 and Ukraine’s war against Russian aggression. Obviously this has not happened; the Hungarian PM and pro-government media ignored the similarities.

Over the years, thanks to his rhetoric against the west and the EU, Orban has turned his conservative base from a neutral or slightly pro-EU stance to staunchly pro-Russian. A recent investigative story by Atlatszo showed that polls showed that Hungarians' view of Ukrainians was unfavourable before the war and that has not changed since, which Orban’s campaign team ruthlessly exploited in the election campaign.

The Hungarian PM puzzled everyone two days before the holiday in an interview on state media saying that Hungarians in 1956 fought to achieve a peace negotiation with Russians. The comments drew instant criticism from historians and opposition parties also claimed Orban was distorting historical facts to use past events for his current political narratives.

That thread, however, did not appear in Orban’s speech on Sunday, but he used old clichés that the West failed during the 1956 revolution, referring to the absence of support. This set up military oppression and a communist puppet government in Hungary for another 35 years, he added.

Orban also took an aim at his critics in Brussels and in Hungary.

"We should not worry about those who are sniping at Hungary from the shadows or from the heights of Brussels; they will end up in the same place as their predecessors," he said, insisting that ever since Hungary had been governed by a conservative government, the country had emerged from every crisis stronger than it was before entering it.