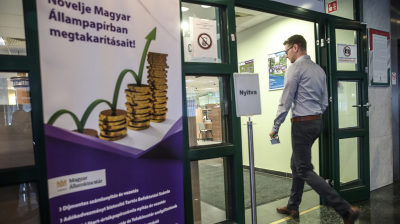 Private banking assets in Hungary increased by 12.2% y/y to HUF5.2 trillion (€15.9bn) in the first half of 2019 as favourable market conditions lifted returns, local media reported on July 24.

First half growth of 6.6% suggests that that the full-year growth could come close to last year’s 14% expansion. The launch of the new retail bond could slow down the inflow of capital, industry sources said.

Private banking services start around HUF50mn on average, but there are big differences between banks. Takarekbank offered the lowest threshold with HUF20mn and Bank Gutmann the highest, at HUF320mn.

The private banking arm of Hungary’s biggest lender remained the top player on the market. OTP had HUF1.85 trillion under its management, up 6.8% y/y. Assets managed by Raiffeisen and MKB grew by 9% each to HUF560bn and HUF546bn respectively by the end of June.

Broken down by investment classes, private banks held 42% of the assets in bonds, 25% in investment funds and only 11% in shares.

The five-year retail bond (Map Plus) with a 4.95% yield if held until maturity, prompted many clients to buy the new government security instead of boosting their private banking accounts, according to the survey of the 15 largest service providers.

The new retail bond has been a stunning success as retail investors subscribed a record HUF1.3 trillion since June.

The buying frenzy slowed down in the seventh week, as weekly subscriptions were below HUF100bn for the first time. In the first seven days, households snapped up HUF583bn of the new retail bond, which sucked savings from bank deposits, but also from investment funds.

The latest data from the Hungarian Investment Fund and Asset Management Companies (BAMOSZ) showed that clients withdraw HUF179bn from funds in June, more than in any month in a decade.

Clients also redeemed savings from other government securities as the new retail bond offers the higher yields in all stages of its maturity and returns are exempt from the capital gains tax.

Analysts also noted that the lucrative yields offered by Map Plus could divert investments from real estate, hence it has the potential to cool off the robust price growth in the sector.

Hungarian house prices continued to rise dynamically in 2019. In fact prices rose at the fastest pace in Q1 with 11.3% in the EU, driven by strong demand from investors. Half of the new home purchases are made for investments. Rising income of households, low interest rates and generous state subsidies have fuelled the boom.

Belgian commissioner presses for continuation of Article 7 procedure against Hungary

European Commissioner for Justice Didier Reynders called for the Article 7 procedure against Hungary to be continued when Croatia takes the revolving presidency of the Council of the EU in January to ... more

Hungary is ready to start talks on joining the Eurasian Development Bank (EDB) as a full member, Finance Minister Mihaly Varga said at a conference in Moscow on November 29. Joining the EDB would ... more

A Hungarian investor has taken over Neckermann Magyarorszag, the Hungarian unit of bankrupt UK travel company Thomas Cook, local media reported on November 28. No details were revealed on the ... more