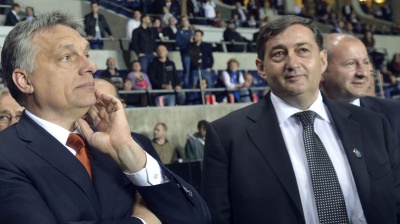 Lorinc Meszaros (right), the former gas fitter from Felcsut, has become Hungary's richest man in five years, with a fortune estimated at €1.3bn, thanks to his friendship with PM Viktor Orban (left).
By bne IntelliNews June 14, 2021

Hungary’s richest man Lorinc Meszaros has defended his rise to the top and fended off criticism that his wealth comes from his friendship with Prime Minister Viktor Orban.

In a rare interview to Index.hu, the former gas fitter from Felcsut, the home village of the prime minister, said the opposition was using him to attack the radical rightwing government. Seen as the symbol of a corrupt regime, Hungary’s opposition is putting Meszaros at the centre of its campaign in what promises to be the closest elections since 2002.

The 100 richest Hungarians list by business site Napi.hu showed that Meszaros has amassed HUF455bn (€1.3bn) in wealth, dethroning Sandor Csanyi, chairman-CEO of CEE’s leading lender OTP Bank, who topped the ranking for the past 10 years.

Meszaros’ worth jumped from HUF7bn in 2014 to HUF270bn before the pandemic. Last year alone his net worth grew by HUF185bn, more than Rafael Nadal earned in his entire carrier, independent media points out.

The contrast is even more shocking when going back before 2010, when the radical rightwing party of Viktor Orban was still in opposition and Meszaros was running his gas fitting business with a few employees.

Meszaros claimed that his business success has little to do with the ruling Fidesz government in place since 2010.  "The opposition is using me as a tool to attack the government”, he claimed. "I have managed to do well under other governments as well", he said.

However, the numbers show otherwise, according to fact-checking of the interview by liberal HVG. In 2008, he made just €19,200 at a time when the average EUR/HUF rate was 260.

It is mostly public contracts that have catapulted the 55-year-old to the top of the business elite, as the most powerful businessman in Hungary, yet he tries to downplay the importance of this.

"We have won less than 10% of public contracts, either exclusively or in partnership with others", he says.

Behind the attacks, he sees leftwing forces in Hungary that are interested in promoting the interests of multinational companies, a common allegation of the rightwing. He recalls that many construction companies were privatised during the change of regime and local players had no chance of winning public tenders, the playing field was uneven to favour foreign groups. "It was a very sad period", he recalls.

Meszaros owns directly or indirectly 62.5% of Opus, the BSE-listed holding company, which has expanded aggressively over the last five years. Consolidated net assets jumped 20-fold to HUF635bn in 2020.  Opus has a rapidly growing business portfolio spanning hotels, agriculture, industrials, and energy in 40 companies.

With almost 30,000 employees working in almost every segment of the economy, we are the largest private-sector employer, he stressed.

Meszaros unveiled plans for Opus to expand its flagship construction business further in the region in Croatia, Slovakia and Romania. The company is eyeing the purchase of power plant maintenance companies in Libya as well.

Construction is one of the fastest-growing units of Opus. Meszaros’ companies are involved in the €2.1bn reconstruction and expansion of the Hungarian section of the Budapest-Belgrade rail line financed by Chinese-loans.

When asked about the share price of Opus, he said it is undervalued, as markets have not priced in acquisitions in the energy sector. Opus has used proceeds from a recent HUF30bn bond issue for the acquisition of electricity distributor Titasz from the local unit of Germany's E.ON and a 49.57% stake in regional gas distributor Tigaz from MET Holding, based in Switzerland.

"The share price is low compared to the all-time high of HUF760 in 2017, but is two-fold higher after the bottoming out in the spring of last year", he noted.

Meszaros said the share price should be around HUF350, a target set by brokerage Equilor. His comments lifted the Opus stocks by 7% to HUF245 on Friday.

Nicknamed as the cashier or the bagman of Viktor Orban by his critics, Meszaros was in defensive mode when asked about state subsidies given to his companies during the crisis at a time when many SMEs and private entrepreneurs in entire sectors were left stranded without any help.

Tourism had suffered the most during the pandemic, but the government was quick to throw a lifeline to Orban's cronies, including the Opus leader, local media adds. One of the largest hotel chains, Hungest Hotel, received a HUF17bn grant last year provided that it maintains staff. Yet the company laid off more than 500 people, a breach of the agreement with the government without any consequences.

Overall Opus reported a 10% rise in revenues to HUF227bn in 2020 and the hotel sector only managed to incur a loss of only HUF0.4bn.

Meszaros has also become a big player in banking. He called the merger of three Hungarian-owned banks the most important milestone in the banking sector since the late 1980s when the first commercial banks appeared on the market. Hungary’s second-largest bank will be completed with the merger of Takarekbank, MKB Bank, and state-owned Budapest Bank by 2023-2024 creating competition for market leader OTP.

"We are trying to create a new financial institution that is trendy, flexible and moves comfortably in the digital world," he said.

Meszaros confirmed that he will have less than a 50% stake in the new bank.

Meszaros tax and the Felcsut trial

Corruption will be a central issue in the 2022 elections. Budapest liberal mayor Gergely Karacsony  a potential prime ministerial candidate, is campaigning with the "Meszaros tax", an extra levy on companies that have gained extra wealth during the pandemic.

Calculations by local media show that businessmen close to the government have won a total HUF800bn in state tenders during the year of the pandemic.

Head of the liberal Momentum party, Andras Gyor-Fekete went even further, saying that the political and economic architects of the regime should be indicted in what he called a Felcsut trial.

Comments like these reminded Meszaros of the dark chapters of Hungarian history.

"It is regrettable that three decades after taking our freedom back, this is what a young political generation has in mind", he said.

These threats attack the more than 30,000 people working for the Meszaros group, he concluded.