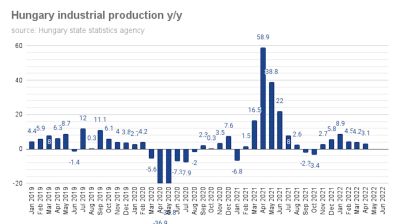 The output of the automotive sector, Hungary's biggest manufacturing segment, fell 7.1% y/y in April, causing growth in headline industrial output to slow to 3.1% y/y in April from 3.6% in the previous month, according to the second reading by the Central Statistics Office (KSH) on June 14.

On a monthly basis, output fell for the second straight month, down a workday-adjusted 1.6%.

Hungary’s industry quickly bounced back to above pre-pandemic levels, but the growth trend has clearly stalled in the last couple of months, according to analysts. The outbreak of the war between Russia and Ukraine is restraining global economic growth, which will also affect Hungary’s export-dependent industry, analysts said.

The automotive segment, which accounted for 21% of manufacturing sector output in April, continued to be challenged by the semiconductor shortage and supply chain problems, KSH said.

The weaker performance of the vehicle makers was offset by other sectors.

In the first four months, output rose 4.9% from the same period a year earlier. Industrial growth could be in the 5-6% range this year, according to analysts.

NEMETHY: Is the world heading towards a “polycrisis”?
Hungary agrees on deferred payments with Gazprom for winter gas deliveries
Orban faces perfect economic storm of his own making