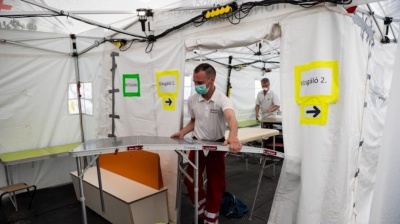 Hungary expects the peak of the coronavirus (COVID-19) epidemic in early May and the government has launched a controversial programme to empty tens of thousands of hospital beds to make room for new coronavirus patients. The move has puzzled health care professionals as the number of confirmed COVID-19 cases remains relatively low although the number of tests is also one of the lowest in Europe.

Last week an order from Hungary's minister of human resources required that 30,000 of Hungary's 60,000 hospital beds be vacated by April 19 to make room for new coronavirus patients, requiring current patients, some with chronic illnesses, to leave hospitals. In a matter of weeks, hospitals will have to have 40,000 beds ready for COVID-19 patients, or 60% of their bed capacity.

The measure has been widely criticised by civil groups, opposition parties and the Hungarian Chamber of Medical Professionals. They are concerned that thousands of seriously ill patients released from the hospital will have no access to proper medical care at home. The measure will place tremendous pressure on relatives, who may be forced to give up their jobs in order to look after their loved ones, they said.

As hospitals struggled to empty thousands of beds within a few days, patients with chronic diseases were transferred or sent home regardless of their condition, according to local media. Last week there were numerous reports that people with serious conditions were literally kicked out of hospital.

The government's requirement to vacate some 40,000 beds for infected patients would be proportional to 150,000-180,000 cases of coronavirus in Hungary, about 100 times more than are currently confirmed

The latest data on confirmed coronavirus cases indicates a rise in infections in Hungary, according to an official statement by the government website tracking data. By Sunday there were 1,916 infections and 189 deaths. The number of infected healthcare workers is between 150 and 200.

There are 847 people are being treated in hospital for COVID-19, 63 of whom require ventilation.

Since the first cases were diagnosed at two Iranian medical students, some 47,000 laboratory tests have been performed.

Hungary has succeeded in flattening the curve of novel coronavirus infections but the country is soon expected to enter a period of mass infections, the chief medical officer said on Friday.

Speaking to public radio Viktor Orban said the preventative measures implemented so far have allowed Hungary to buy time and prepare hospitals for coping with the outbreak. More than a third of the hospital beds had been unoccupied, only 16% of patients waiting for non-urgent surgery had to be sent home, Orban noted.

The prime minister pointed out that just ten coronavirus cases in each of Hungary’s more than a thousand elderly care homes would result in 10,000 people in need of hospital care. The aim is to have 8,000 functioning ventilators and more than 30,000 hospital beds for treating COVID-19 patients in the event of a worst-case scenario.

Despite forecasts that the epidemic is to peak in early May, the government decided to go ahead with the baccalaureate for secondary schools in May. There will be only written exams with precautionary measures. It will not be compulsory to take the final exams now, anybody would be able to make it up during the autumn - however, postponing the exams altogether would have caused unacceptable chaos in the university application process, cabinet chief Gergely Gulyas said.

Teachers union PDSZ protested against the decision and called on staff to take out paid leave for the day of exams. In response, the state secretary for education compared union leaders to the Red Army Faction accusing them of disrupting the exams driven by political motives. PDSZ issued a statement saying it is the government that is putting lives at risk.

Budapest-listed IT company 4iG said on June 15 that it signed a non-binding letter of intent to acquire a 51% stake in Space-Communication (SpaceCom), an Israeli ... more