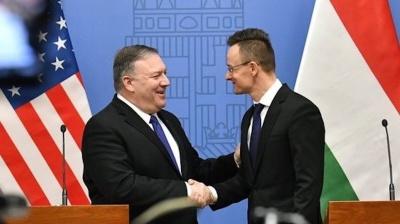 US Secretary of State Mike Pompeo kicked off a five-leg European tour in Budapest, where he signed a defence cooperation agreement and agreed on the sale of US military equipment. Pompeo also discussed the rule of law and the situation of civil organisations in talks with NGOs.

While the US had kept its distance from Central Europe, the vacuum has been filled by its competitors, which was unacceptable, Pompeo said at a joint press conference held with his Hungarian counterpart, Foreign Minister Peter Szijjarto. Commenting on the situation in Ukraine, he said Russian President Vladimir Putin must not be allowed "to drive a wedge between our friends and Nato".

It was the first visit by a US secretary of state in eight years, which came eight months after Szijjarto was hosted in the White House. Under the Obama administration, political ties hit rock bottom. Washington had been critical of the deterioration of the rule of law and democracy in Hungary. Viktor Orban, who was the only European leader to openly support Donald Trump, was happy to see a change of leadership in Washington.

According to diplomatic cables revealed by investigative news site Atlatszo, the State Department considers that the Central and Eastern European region had been neglected by the Obama administration, which left the countries to fall into the arms of Russia (and to some extent China). Reducing Eastern influence over Hungary and other regional countries in the spheres of defence, security and energy has become a priority so that these countries would support the US's geopolitical interests instead. Washington in exchange would not intervene in issues such as the rule of law and civil liberties.

There were reports prior to the Pompeo's visits that the diplomats in the State Department were frustrated over the Hungarian government's position over Russia, the Central European University (CEU) and the handling of some issues. “Congress is taking a hostile stance towards Hungary, there is a constant criticism because of CEU and the extradition case,” said Wess Mitchell, Assistant Secretary of State at the State Department, in December, according to the diplomatic cables.

Last year two Russian arms traders were arrested in Hungary. The government, presumably as a gesture to Russia, sent the two to Russia instead of to the US. It has been part of the game played by Orban’s government, which is trying to balance its relationship between its ally, the US, and Russia, local media reported.

There were absolutely no signs of tensions between the two sides on Monday. Hungary and the US have started to rebuild their political ties, Szijjarto said, adding that the Hungarian government and the Trump administration shared a similar approach on many issues and both pursue patriotic policies with priority given to national interests.

Negotiations on a bilateral defence cooperation agreement between Hungary and the US have wound up and the text of the document will be submitted to the Hungarian parliament's defence committee next week.

The two countries last signed a bilateral defence cooperation agreement in 1997, and a new one was required to meet changing security challenges, Szijjarto said. This has been one of the main stumbling blocks between the two countries and Hungary cited the lack of an agreement when not extraditing the two Russian arms dealers to the US.

Talks on the acquisition of a mid-range air defence system from the US were at an advanced stage. Hungary has accelerated efforts to overhaul its ageing weaponry and gone on a spending spree. So far it has signed deals with European manufacturers. Following the footsteps of Poland and Romania, Hungary is expected to purchase a US Patriot missile system, which would be the largest arms procurement in the army modernisation programme launched in 2017.

Under the Zrínyi 2026 scheme, Hungary will modernise its troops’ weaponry, gear and electronic devices. A member of Nato, Hungary is bound by the allianceʼs agreement to increase military spending to 2% of GDP.

Washington has long been pressuring Hungary to diversify its energy sources and reduce dependence on Russian gas. Washington voiced opposition to the building of a new Russian pipeline to the Central European countries, and asked the government to be more committed in its support for the Krk LNG project in Croatia. Some 80-85% of Hungary's natural gas consumption is covered by Russian imports and the long-term natural gas contract between Hungary and Gazprom will expire in 2021

At the press conference, Szijjarto said he had asked Pompeo for help to get ExxonMobil to take a decision on starting offshore gas production in Romania as soon as possible. This would advance the diversification of Hungary's gas supply.

Szijjarto said Hungary's cooperation with China or Russia does not impact its dependability as a member of the Nato alliance. It is not Hungarian or Central European energy companies that are building gas pipelines with Gazprom, he added.

The secretary of state also criticised China and expressed wariness of its attempts to create a bridgehead in Europe. Allowing China's Huawei to expand in Hungary would put the population’s privacy at risk. Huawei established a major logistics hub in Hungary, used as a springboard for its expansion in western Europe. It is heavily invested in network development for 5G technology, a key priority of the government.

Beijing’s handshake sometimes comes with strings that leave Hungary indebted politically and economically, he told his counterpart. He later raised this issue at the dinner with Orban at his residence.

Key Chinese projects in Hungary include the construction of the Budapest-Belgrade rail line. As the government does not wish to shoulder a cost overshoot, it is calling a new tender, it was announced in October. Hungary estimated the cost at below HUF600bn (€1.9bn) in May, but the most favourable bid made was HUF700bn.

Pompeo began his visit to Budapest by meeting representatives of NGOs, the Hungarian Helsinki Committee and the Hungarian Civil Liberties Union (TASZ) on Monday.

In a statement afterward, the activists said they had discussed the rule of law in Hungary, attempts to stifle freedom of the press and government smear campaigns against them.

The NGOs said the fact that Pompeo had met them and had expressed an interest in their opinions demonstrated that top US officials were dedicated to protecting the values of constitutionality and the role of civil society, even when it came to relations with allies.

Pompeo said the US is increasing people-to-people ties with Hungary, including exchange programmes for high school students and programmes for independent media outlets that have been a particular target of the Orban government.