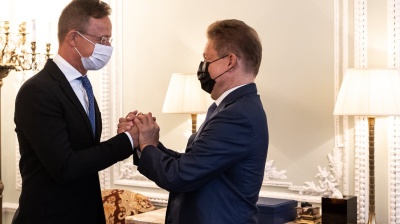 Hungary has worked out all details and issues of a long-term gas delivery agreement with Russia that will replace one expiring in the autumn, Minister of Foreign Affairs and Trade Peter Szijjaro announced on August 30 after meeting with Gazprom's CEO Alexey Miller.

Hungary signed its last long-term agreement on gas deliveries from Russia in 1995, which expired in 2016. This was extended on an annual basis.

The agreement, to be signed at the end of September and coming into force from October 1, will be in force for 10+5 years, with an option to modify delivery volume after the tenth year.

Under the agreement, Hungary will buy 4.5bcm of gas a year from Gazprom, including 3.5bcm delivered from the south, through Hungary’s interconnector with Serbia, and 1bcm via the pipeline running from Austria.

Construction on a gas pipeline linking the Hungary-Serbia border to Hungary’s gas pipeline network is set to be completed in October. The pipeline will connect Hungary to the TurkStream pipeline.

Russia for long has advocated the completion of the interconnector between Hungary and Serbia, allowing Russia to bypass Ukraine. Gas deliveries from Ukraine to Hungary were occasionally halted in recent years due to the Russian-Ukrainian conflict on gas prices.

Szijjarto said the price the sides agreed on is much better than the one in the delivery agreement expiring this year. This will allow keeping gas prices low, he added.

The government fixed utility prices, leading to a 25% cut in electricity, gas and central heating prices for retail users just before the 2014 elections, which helped Viktor Orban's government secure a second landslide victory after sweeping into power with a two-thirds majority in 2010. Energy prices are now some 30% below 2014 levels.

Keeping utility prices low remains a top priority for the government ahead of the 2022 elections.

The new contract will replace the 9bcm annual contract between Gazprom and the Russian-Hungarian joint venture Panrusgaz, signed in 1996. Under this contract, the main supplies are transited through Ukraine, via Beregovo on the Ukrainian-Hungarian border, with the rest via Baumgarten in Austria.

Gazprom declined to comment on the reason for the volume reduction under the contract with Panrusgaz, as well as the pricing principle. According to market participants, the pricing will be based on the quotations of the CEGH Baumgarten hub.