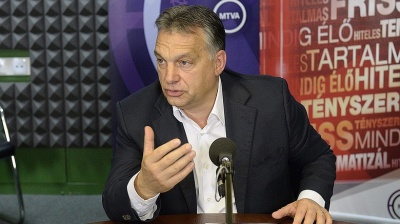 Since 2010, Orban turned off requests to be interviewed by "unfriendly" media
By bne IntelliNews November 29, 2018

The right-wing media portfolio owned by businessmen close to Hungary’s ruling Fidesz party were transferred to a foundation overseen by a loyalist of Prime Minister Viktor Orban, leading to an unprecedented concentration of media power, local media reported on November 28. The approval of the transfer by the media authority is more or less a done deal as Fidesz-appointed members are in a majority in the regulatory body.

On Wednesday, Talentis Group, the company owned by Lorinc Meszaros, a former gas fitter from Orban’s home village Felcsut, announced a string of takeovers of several right-wing publishers, including Lapcom. After the acquisition, 19 out of the 20 largest print newspapers in the country were in the hands of Meszaros. The number one spot belongs to a tabloid owned by Ringier.

A few hours later, Hungary’s most powerful oligarch announced the transfer of his entire media business to a foundation called the Central European Press and Media Foundation, which would serve as the new centralised body overseeing the entire spectrum of the right-wing media portfolio.

Just a few hours later, some ten publishers also announced they will transfer all their stakes to the foundation in what seemed like a well-orchestrated and organised move. There were no reports on the financial details of the transfers.

The new structure will create more synergy, lead to a more efficient operation and an unprecedented concentration of power, analysts said. As the vast majority of the products in the portfolio would not survive under real market conditions, the foundation will have to inject billions of forints into them in the form of state subsidies to keep them afloat, they added.

The first reports on the centralisation of government-friendly media were published in the summer after news emerged of huge financial shortfalls after the takeover of Echo Tv by Meszaros.

The foundation will be controlled by Gabor Liszkay, who showed his loyalty to Orban on several occasions. Liszkay was the owner and chief editor of Hungary’s leading conservative daily until February 2015. He was bought out by Simicska after the oligarch’s salty burst out against the PM and went on to set up a new conservative daily from state funding, but the newspaper can barely be called a success as it has a very small readership.

The foundation will be supervised by three members, one of whom is a former lawyer of Orban.

The odd one out

Laszlo Puch, the former cashier of opposition party MSZP and the owner of the sole opposition daily Nepszava, also sold his stakes in the agricultural weekly Szabad Fold, a well-known brand in rural Hungary with some 60,000 subscribers to a company owned by Meszaros.

Puch, one of the most influential figures of the Socialist party, regained control of the debt-ridden newspaper in late 2016. He gave no reason for selling his stakes in the publisher which unlike many right-wing media groups generated hefty profits in 2017 without state ads. Local media says that he wanted to secure the future of his leftist daily.

Some disagree with that concept, based on a 2016 meeting between Puch and Orban. According to unconfirmed reports, the two met at a ranch owned by Meszaros, and Puch apparently received guarantees from the prime minister to keep Nepszava afloat. The daily has since received hundreds of millions of forints of ads from state-owned companies but government ad campaigns against Brussels and George Soros also feature heavily on its pages.

After Orban’s college friend and long-time ally, Lajos Simicska, the former cashier of Fidesz, turned against him in February 2015, the PM quickly built up a right-wing portfolio concentrated in the hands of three to four business circles.

After the split, Simicska's media outlets became the voice of the opposition and fierce critics of the government. Just after the third supermajority victory by Fidesz in April, however, Hungary’s 11th richest person threw in the towels. First, he shut down his newspaper and a few months later he sold all his stakes to his business partner, Zsolt Nyerges, who has recently announced that the business empire of the oligarch was acquired by companies owned by Meszaros. Meszaros has since become Hungary's second richest man, or even the wealthiest according to some accounts, and he has become the largest media owner.

Before Wednesday’s milestone events, he held ownership in 15 out of the 19 county newspapers, which all boast high readership despite losing some 20% of subscribers in the last two years. Meszaros also owns a commercial television channel with very low ratings, several national dailies and dozens of internet news sites.

Hungary's second largest commercial broadcaster, Tv2, is owned by Andy Vajna, a commissioner for the film industry. Local media say he has apparently fallen out of favour with Orban, who is not satisfied with the falling ratings and massive losses incurred by the broadcaster, despite massive inflows in state ads. Vajna may be forced to quit Tv2 and transfer it to the new central foundation.

Another power centre in the Fidesz media empire is run by a former advisor to Orban. Arpad Habony has made headway in helping Fidesz establish a presence in the tabloid media in both the print and internet segments. Habony’s name came up in the scandal surrounding fugitive Macedonia ex-prime minister Nikola Gruevski, who recently fled to Hungary to avoid a prison sentence in his home country. Habony’s associates have acquired ownership in right-wing media in Macedonia.

The massive media presence of the Fidesz led government in the countryside played a major role in the party’s third landslide election victory in April 2018.

State news channel operator MTVA has been under the direct control of the ruling party since 2010, but other news outlets also regularly receive the main talking points of the government. Government-controlled media is exaggerating the fears from illegal migration, a constant topic of the last three years, the theme that has helped Fidesz cement its powers. Government control over the media will strengthen further with the unprecedented events unfolding on November 28, independent news sites reported.