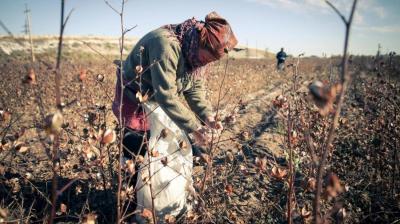 It is too early to end the boycott says the Cotton Campaign.
By Kanat Shaku in Almaty April 17, 2020

The Cotton Campaign coalition of human rights groups has said it would be premature to lift a longstanding global boycott of Uzbek cotton and textiles as called for by Tashkent. The government of Uzbekistan requested the move to help the country deal with the economic impact of the coronavirus (COVID-19) pandemic.

Uzbek officials this week also cited their progress in eliminating forced labour from cotton harvesting in asking for the embargo, introduced in 2006, to be ended. In an open letter to the Cotton Campaign, Uzbek Labour Minister Nozim Khusanov said that Uzbekistan was facing an “unprecedented dual threat” to both its economy and public health caused by the spread of the coronavirus. The “pivotal” ending of the boycott, subscribed to by 260 apparel manufacturers and retailers around the world, could double Uzbek textile exports to Western markets and create much-needed jobs, he noted. Officials in Tashkent have also estimated that ending the boycott could open the way to an extra $1bn in earnings for Uzbekistan from sales this year of cotton and textiles on Western markets.

But the Cotton Campaign said in an April 16 statement that only the complete eradication of forced labour along with civil society reforms such as registering NGOs that monitor worker rights would spur it to lift the boycott.

“The issue is less whether to end the Pledge—but when and how—and above all, how ending it can become a catalyst for responsible sourcing and investment in a reforming Uzbekistan,” said Bennett Freeman, co-founder of the Cotton Campaign, which campaigns against forced and child labour in Uzbekistan and Turkmenistan.

Prior to the Cotton Campaign response, the government had said in a statement: “Lifting of the cotton boycott is one of the few measures that could quickly generate much-needed jobs and support the economic wellbeing of Uzbeks during the COVID-19 crisis. Textile production alone employs 200,000 workers in Uzbekistan; their wages support the livelihoods of one million people.”

Nate Herman, senior vice president of American Apparel and Footwear Association, was quoted by Reuters as saying “additional assurances” of worker protections were required from Tashkent.

“We recognise and are heartened by the historic progress that Uzbekistan has made toward ending forced labour and members look forward to considering sourcing from Uzbekistan,” said Herman.

The group also said that the pandemic which “has had a devastating effect on the apparel industry worldwide, with steep drops in production orders, defaults on existing contracts, and layoffs of apparel workers” amounted to an additional barrier for brands in striking new sourcing deals in Uzbekistan.

An estimated 150,000 Uzbeks have already lost their jobs due to measures introduced to stem the spread of the coronavirus and over 140,000 migrant workers have returned home, largely from Russia, with no income source.

The boycott has been supported by international companies including Amazon, Calvin Klein, Adidas and Inditex, although the US lifted its market ban on Uzbek cotton last year. As things stand, Uzbekistan, a nation of 34mn and one of the world’s biggest exporters of cotton, mostly sells cotton and textiles on Asian markets, which the government has said means lower prices and limited growth opportunities.

The government has forecast that this year the country will boost its textile exports to $3bn from $2bn last year. If the boycott was lifted, export volumes could double year-on-year, it has also stated.

The UN’s ILO in a February report said that 1.75mn people took part in the annual cotton harvest in Uzbekistan last year. Around 102,000 of them were victims of forced labour, down by 40% compared to the number of people forced to pick cotton in 2018. The UN labelled this as "major progress", since 94% of cotton pickers worked voluntarily, while just a few years ago the entire sector relied on forced labour.

Other public servants ‘forced to work’

The Uzbek-German Forum for Human Rights said the 2019 government ban on the recruitment of students, teachers and health workers to work in the cotton fields led to other public servants being forced to work instead.

Mirziyoyev outlined in January how the government was set to phase out its role in cotton and wheat trading in order to open up opportunities for private companies in Uzbekistan.

Uzbekistan's annual cotton harvest currently stands at just below 3mn tonnes. The government aims to domestically process all cotton harvested in the country by 2025 as part of its strategy to develop the domestic textile industry.