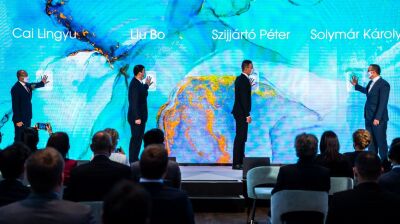 The influence of Huawei Technologies on Hungary’s economy has grown over the past five years, with one-seventh of its European spending taking place in Hungary last year, according to a study by Oxford Economics commissioned by the Chinese company.

Huawei’s procurement stimulated a €405mn GVA contribution along its Hungarian supply chain in 2019, up from €331mn in 2015 with the majority of this contribution, 63.1% coming from the manufacturing industry.

Oxford Economics estimate that Huawei’s operations around Europe supported an overall contribution to Hungarian GDP of €601mn in 2019, accounting for 0.4% of the country's total output. Its contribution has grown steadily, averaging 5.5% each year between 2015 and 2019.

The Chinese telecommunications giant first established an assembly plant in Hungary in 2009, four years after it set up its first offices in the country. The company participated in upgrading the EU’s emergency call system, the so-called 112 in 2013. It has worked alongside providers to develop mobile networks. In 2014, the company worked alongside Vodafone to grow Hungary’s 4G networks.

Four years later it has worked with Magyar Telecom and Vodafone to test 5G technology. The company has boosted its ICT investments in Hungary in recent years and has contracts with more than 600 Hungarian partners involved in developments such as the country’s 5G network. Hungary’s first commercial 5G network launched by Vodafone in October 2019 was powered by Huawei.

Hungary is home to Huawei’s biggest supply centre outside of China. This centre provides business-to-business ICT products to the European customers, such as 5G equipment, fixed telecom network products, data centres and storage.

The Chinese telecommunications giant Huawei is setting up an R&D centre in Budapest, creating 100 new jobs, it was announced in October.