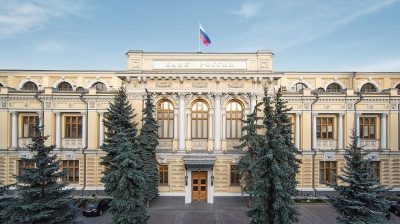 The West has warned that any further escalation of the conflict with Ukraine will see Russia hit with severe sanctions, which could make it much harder for companies and banks to re-finance their external debt. / Image: Central Bank of Russia.
By Theo Normanton in Moscow February 11, 2022

In the event of a Russian invasion of Ukraine, the severe sanctions threatened by the West could have the effect of reducing Russia’s external debt to an historic low. This would hinder Russia’s prospects for long-term growth, but it would also play into President Putin’s “Fortress Russia” strategy.

Russia’s foreign debt stood at 27% of GDP last year, back at pre-pandemic levels, according to data from the Central Bank. In the first half of the year, most of that debt was successfully re-financed and new loans were agreed. But in the fourth quarter, companies and banks were unable to increase their debt against a backdrop of mounting geopolitical tensions. With sanctions now looming, a continuation of this trend could see Russia’s external debt drop to a record low 19% of GDP by 2022-2023, according to a study by Moscow’s Higher School of Economics.

The West has warned that any further escalation of the conflict with Ukraine will see Russia hit with severe sanctions, which could include limiting dollar clearing, cutting Russia off from payments messaging system SWIFT, banning participation in the secondary market for sovereign debt, and adding banks to the SDN list (Specially Designated Nationals and Blocked Persons). British Foreign Minister Liz Truss has also threatened to seize the London properties of Russian oligarchs. While the threat of an all-out invasion of Ukraine remains fairly low, and French President Emmanuel Macron is talking up the progress made in diplomatic talks, tensions remain on the border with Ukraine.

While the effect of the sanctions would depend on their severity, most analysts agree that they are likely to have a destabilising effect on the Russian economy. One of the greatest impacts will be on foreign debt. A combination of rising interest rates and increased sanctions risk will make it harder for Russian companies to re-finance their debt.

If re-financing of debt continues at the same underwhelming level as the fourth quarter of last year, the total external debt of the private sector could fall from $381bn to $361bn at the end of 2022 and $352bn at the end of 2023.

“In the context of growing sanctions risk and the growth of interest rates, re-financing payments on private sector external debt will be difficult,” explained analysts from Moscow’s Higher School of Economics.

Yet a series of measures undertaken by Russian President Vladimir Putin have provided the country with a degree of insulation from sanctions. A highly conservative fiscal policy means that Russia is a net lender to the rest of the world, and has run uninterrupted current account surpluses since the late 1990s.

In a study of the possible credit consequences of further sanctions against Russia, experts from S&P Global Ratings noted that “Russia's net external asset position of some 40% of GDP and the government's net debt position of around 5% of GDP are among the strongest among all the 137 sovereigns we rate. These strengths helped support our sovereign ratings on Russia even in the face of the multiple and sometimes synchronised distress episodes.”

This means that sanction threats, although debilitating, would be unlikely to totally paralyse the Russian economy.

“Putin has worked hard to build ‘Fortress Russia’ to make western threats less of a deterrent, though parts of the economy remain vulnerable to sanctions,” wrote Olga Pindyuk of the Vienna Institute for International Economic Studies in a press release.

With regard to foreign debt, much also depends on the governments introducing sanctions. Russian entities owe four times more to EU banks than to American ones, according to the Bank for International Settlements, so tough sanctions from EU could have an outsized impact.