How sanctions and government policies are strangling Belarusian growth 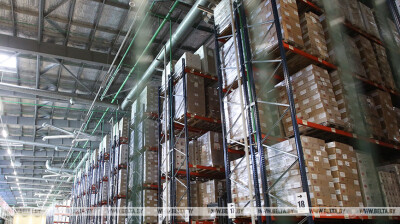 Sanctions, inflation rates and government policies have been (and still are) restraining Belarus’ industrial output and the domestic market’s expansion this year. While sanctions hinder Belarusian manufacturers from reaching their export markets or receiving vital input products, government policies are strangling the private sector with new taxes and price regulation measures.

The effects of Belarus current economic predicament are clearly reflected in the stocks of finished goods of companies in Belarus.

The stocks of finished goods on October 1, 2022 was 65.8% of the average monthly production volume in Belarus. A year earlier, this share was 51.9%.

The stocks of finished goods on October 1, 2022 was higher than on the corresponding dates in 2016-2019. These shares highlight the precarious position of Belarus’ industrial production. During the tumultuous year of 2020, where global border closures stopped exports from reaching their destinations, Belarus (like many other countries) had a hard time to get its exports out to foreign customers. This task proves to be almost just as hard for Belarus this year, as the share of stocks of finished goods come close to the share on October 1, 2020, 68.5%.

However, the stocks of finished goods to average monthly production volume still decreased by 3% between September 1 and October 1, 2020. This year, the relative level of stocks increased by 0.3% for the same period.

The Eurasian Development Bank (EDB) noted a 6.9% y/y decline for Belarus’ foreign trade turnover in September. The value of exports in September decreased by 4.8% y/y; the EDB noted that considering the increase in supply prices (due to increased production costs), the corresponding reduction in physical volumes may be even greater.

The EDB thus concluded that Belarus’ redirection of exports to Russia, Asia and Africa does not yet compensate for the production and logistics chains that were broken by Western sanctions.

On November 9, Belarus and Russia signed an intergovernmental agreement on uniform rules of competition, which intends to align anti-monopoly legislation between the two allies.

Western sanctions and the war in Ukraine have left landlocked Belarus with little choice but to negotiate with Russian region officials and the Kremlin for preferential transport and shipment deals through and from Russia. Moreover, Russia’s role as final destination for Belarusian products has also increased over the year. The Kremlin therefore holds the Belarusian economy in a stranglehold, where Belarus is forced to integrate further both economically and politically with Russia.

While Belarus’ exports have decreased due to Western sanctions, the larger, simultaneous decrease in imports has still left the country with a trade surplus. This surplus decreased in September as the y/y decline in imports shrank to 8.9% for September (compared with 12.7% in August).

This slowdown could indicate that the Russian-Belarusian import substitution project is beginning to bear fruit, which can help support Belarus’ declining industrial output.

Lukashenko has told Belarusian state enterprises to "seize emerging opportunities" from the market openings that have appeared in the wake of Western enterprises leaving the Russian and Belarusian markets over sanctions related issues.

Although Belarus’ light industry is not well known for its international competitiveness, it could manage to increase its share in the Russian and Belarusian markets. However, state-sponsored expansions of largely inefficient SOEs will be done at the expense of the private sector.

Other state-sponsored projects, such as the Belarusian-Chinese “Great Stone” business park, are also noticing the country’s current recession. While Great Stone officials said in mid-July that they expected their virtual pavilions to attract sales worth $28mn per month, the virtual pavilions have since then only managed to attract sales worth $3mn.

In October, Chinese car manufacturer Geely, present in Great Stone, sold 280 new cars in Belarus, which is 5% of the plant’s capacity. Moreover, this constituted 62% of the total amount of new cars sold in Belarus last month. In total, the market decline for new cars in Belarus was 86% in October.

Inflation is eating up nominal salary and pensions increases in Belarus (Lukashenko ordered the third pension increase for 2022 on Thursday, November 10). The new price regulation system introduced on October 20 has, according to officials, led to a decrease in the inflation rate. However, this is expected to have been achieved by the decrease in profit margins.

The price regulations hit private enterprises the hardest. Belarus’ Ministry for Anti-Monopoly and Trade Regulation was forced to remove flowers from the list of price-controlled goods, as Belarusian flower producers said that with price regulation there would be no more flower production in Belarus.

In several towns and cities across the country, business owners have refused to go to work and sent countless complaints to local authorities over the regulations. Nevertheless, Minsk is going ahead with its new regulatory framework, which seems at least to create the illusion that inflation is not eating away on its growth numbers.

A new tax regulation for private enterprises’ co-operation with artisans, which will be introduced in January 2023, is also reportedly in preparation. The new regulation would force stores to pay taxes for co-operating with self-employed artisans, and some stores are already said to have begun returning their products.

Belarus is a country with great innovative minds, and to some extent, this innovation mindset also exists in the government and its enterprises. Most notably, Belarus has been the home of many IT-sector success stories, many of which have left the country since 2020.

In its bid to expand control over every sphere of life in the country, the government in Minsk is hindering the country’s great growth potential. In 2020 and 2021, political repressions forced people from every sector out of their jobs, and many decided to leave the country.

Today, the private enterprises and the self-employed entrepreneurs left are being forced to stop, halt or decrease their business activities due to government policies that in the end aim to retain and expand political power. These businesses are being set aside in favour of the expansion of government enterprises, which long ago proved to be ineffective.