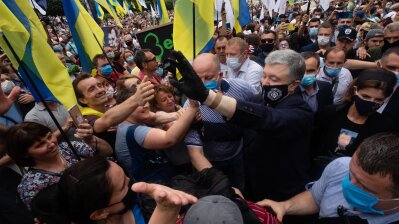 President Poroshenko was in court to face treason charges but it seems that the authorities have forgotten how to organise a good show trial. / wiki
By Robert Homans in Washington DC January 18, 2022

Today, here in Alexandria, Virginia, we’ve been following on Ukrainian television former President Poroshenko’s arrival in Kyiv, and his subsequent court appearance in connection with charges of High Treason brought against him. Here is what took place today:

Some background and observations:

In the meantime, there are 100,000 soldiers stationed near Russia’s border with Ukraine.

At the time of opposition firebrand Yulia Tymoshenko’s prosecution, an observer pointed out that prosecutors in countries that made up the former Soviet Union, including both Ukraine and the Russian Federation, have forgotten how to conduct a proper “Show Trial.” Unlike the courtroom where the proceedings against war veteran Nadiya Savchenko, Poroshenko and Tymoshenko took place, a proper show trial is held in an ornate courtroom, where the accused is placed in a cage after having already made a confession, the judge and prosecutor make impassioned statements about the heinous crimes perpetrated by the accused, a sentence passed out followed by the prescribed punishment.

Instead, Tymoshenko was allowed to make a mockery or the proceedings in her trial, where the judge wore thick glasses and he appeared to be bothered by a nervous tick in one of his eyes (he now resides in Russia). Savchenko, a former Ukrainian helicopter pilot who, in June 2014, was captured in Donbas by occupiers and turned over to Russia was, in her trial in Russia, allowed to do the same thing.

Today, Poroshenko managed to make a mockery of the proceedings against him, without even being arrested or being put on trial.

Decoupling from West to leave Russia as China’s junior partner
1 day ago
MACRO ADVISORY: Ruble at 5-year high, how strong can it get?
5 days ago
COMMENT: Sanctions are working, but the West risks isolating Russian reformers instead of galvanising them
9 days ago
NEMETHY: Where are US markets? Where are they heading?
9 days ago
COMMENT: Constanta concerns
15 days ago