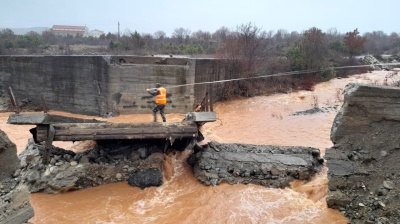 Efforts to repair the Kalivac bridge in Lezha, Albania. The bridge collapsed, cutting off around 1,500 people in nearby villages. / mod.gov.al
By bne IntelliNews January 11, 2021

Flooding has caused chaos in several Southeast European countries from Albania to Bulgaria.

Heavy rain and snowfalls in recent days resulted in rising river levels and widespread flooding that resulted in dozens of people being evacuated from their homes in Albania and Kosovo, while emergency situations were declared in parts of Bulgaria and Serbia.

More than 30 families were evacuated in the western Albanian municipalities of Lezha and Durres due to floods caused by heavy rains in recent days, the defence ministry announced on January 10.

The Albanian army evacuated 28 families in Lezha because their homes were at risk as the Drin River overflowed. 2,850 hectares in the municipality are under water, the defence ministry said.

Eight families were also evacuated in Durres and 20 homes were flooded. So far only 520 hectares of land are under water in this area. Shkodra is another region badly affected by the floods, as are Lac, Reshen and Tropoja.

The floods have led to collapsed electricity infrastructure resulting in power outages in a number of areas.

The Kalivac bridge in the municipality of Lezha collapsed due to the flooding in the last few days, isolating about 1,500 inhabitants of the surrounding villages.

The National Civil Protection Agency is cooperating with local governments to prevent any situation that may arise from the persistent rainfall, which was forecast to peak on January 11.

In Kosovo several cities and villages have been flooded and the Kosovo Security Force was deployed to assist citizens in the affected areas.

In Fushe Kosove (Kosovo Polje), in central Kosovo, the flooding caused damage to shops, cars and apartment buildings while the road connecting the municipality with the capital Pristina was under water.

Rescue teams were deployed on January 11 to evacuate residents from the affected buildings, Prishtina Insight reported.

In Drenas, also in central Kosovo, citizens were facing power cuts and a lack of drinking water following the floods. About 50 people were evacuated from their homes in Drenas.

The village of Dobroshevc has been cut off, as heavy rains destroyed the bridge, leaving the area without access to infrastructure.

Meanwhile, flooding in eastern Kosovo has caused disruption to the water supply from the Perlepnica reservoir. Lutfi Haziri, the mayor of Gjilan in eastern Kosovo, was cited by RTK as saying that 18 citizens have been evacuated from the area.

The outgoing prime minister, Avdullah Hoti, who visited Drenas following the floods said that the government will provide help to all citizens affected by the situation.

Heavy rains have flooded several towns in Bulgaria and Serbia with some of them declaring emergency situations, local media reported on January 11.

In Bulgaria, the town of Tran declared an emergency, while in Novi Iskar people have been evacuated. In Tran, the river Erma has risen by three metres, causing floods. Local authorities have started clearing up and addressing the damage.

Bulgaria’s Economy Minister Lachezar Borissov set up a crisis team to monitor the levels of dams, and the ministry claims all preventive measures have been taken to avoid further floods.

In neighbouring Serbia, b92 reported that several municipalities were flooded in the southern part of the country. Several areas in Pirot were covered by water and the mayor declared an emergency situation. In the municipality of Vlasotnica, several villages were left without electricity or running water due to the heavy rains.