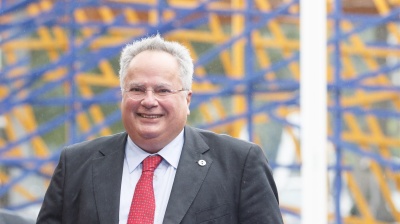 By Valentina Dimitrievska in Skopje October 18, 2018

Greek Foreign Minister Nikos Kotzias resigned on October 17 after a disagreement with the country's defense minister over the name deal with Macedonia.

Kotzias and Macedonian Foreign Minister Nikola Dimitrov signed a deal in June to solve the long-standing name issue, according to which Macedonia should change its name to North Macedonia. The agreement will open the way for the country to become a Nato member and to launch EU accession talks next year. However, the agreement was blatantly rejected by opposition parties in both countries and also by the nationalist Independent Greeks (ANEL) party, a coalition partner in the Greek government.

Kotzias submitted his resignation a day after a tense cabinet meeting during which he clashed with Defense Minister Panos Kammenos from ANEL over the Prespes agreement. Kammenos is against the deal.

Greek daily Kathimerini cited its own sources as saying that Kotzias was disappointed because he did not receive enough support from Prime Minister Alexis Tsipras or his other cabinet colleagues.

During Tuesday’s cabinet meeting Kammenos also accused Kotzias of mismanaging secret foreign ministry funds and being a man of US billionaire George Soros, according to the same sources.

Kotzias was “deeply offended” by the allegations.

“The PM and a number of ministers made their choices yesterday and I then made my own,” Kotzias said in a tweet.

Tsipras said that he was taking over the position of foreign minister following the resignation of Kotzias to ensure the successful completion of the Macedonia name deal.

Tsipras urged the parliament in Skopje to support the constitutional changes, stressing that Greece will not allow the Balkan country to become a member of any international organisation under the name Republic of Macedonia, Kathimerini wrote. The Macedonian parliament is currently debating the deal.