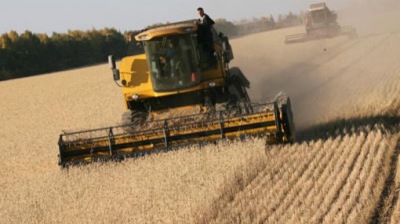 Between them Russia and Ukraine produce a quarter of the world's wheat, but the war threatens to disrupt the harvest and has already interfered with supplies, sending prices soaring. / wiki
By bne IntelliNews February 28, 2022

Prices for wheat in the global grain market have already soared to decade-long highs as the war in Ukraine shuts down ports and threatens to disrupt this year’s grain harvest.

Ukraine and Russia are the world’s two biggest grain producers, and the commodity has become a significant hard currency earner for both. But following Russia’s attack on Ukraine on February 24 this year’s Ukrainian harvest is in danger and its Black Sea and Sea of Azov ports have already been closed as Russian forces fire rockets at key military and infrastructure objects.

Traders are looking for alternative sources of grain, but the options are limited, as Russia and Ukraine together account for more than a quarter of global wheat trade and nearly a fifth of corn. If Russia and Ukraine were both to leave the global grain market for an extended period it would send prices rocketing from their already elevated levels.

As bne IntelliNews has already reported, war in Ukraine would send global grain prices soaring and that has now happened. The spike in prices takes them back to the levels of 2011 that sparked the Arab Spring, and threatens to destabilise many countries in the Middle East that have become heavily reliant on Ukrainian grain exports: Egypt is the biggest single customer, with Ukrainian grain accounting for 15% of its total supply, but Ukraine accounts for between 20% and 35% of supplies to other countries in that region. Countries such as Libya, Yemen and Lebanon are all already heavily dependent on Ukraine wheat imports.

Grain traders are already warning they are struggling to offer wheat deliveries sourced from the Black Sea region and other traders have simply withdrawn from dealing with that part of the world completely.

Egypt is scrambling to find new sources of grain after it cancelled a grain tender last week when it received only one offer of French wheat. Cairo has now scheduled a new one. It has stockpiles of grain enough to last four months, but needs to find a new source such as France or the US. The government in Cairo is already in crisis mode.

“Officials are evaluating the situation around the clock to assess the necessary financing to ensure enough supplies in the coming period,” the government said, according to Reuters, adding it is closely watching global commodities prices.

The war in Ukraine comes at a particularly bad time for grain markets after persistent lack of rain in the Mediterranean regions has led to droughts, harming grasslands and crops such as wheat and barley, which had already threatened to push grain prices up.

The dry weather has had less of an impact in central and western Europe, but the southern parts of Spain and Portugal, southeastern France and northwestern Italy are the most seriously affected by the drought, with soil water content in the region below the seasonal average and irrigation reservoirs well below capacity, according to the European crop monitor MARS.

Rainfall this year has been 64% less than average in Morocco, climate experts say, leaving farmers facing their worst drought in decades.

"Above-average rainfall is needed in the coming weeks and months to avoid an increased risk of negative impacts on crop growth conditions later in the season," the monitor said.

While ports in Ukraine are closed, some Russian exporters are currently fulfilling existing contracts and ships loaded with grain are departing, according to reports, but even Russian shipping is being disrupted by the war and other Russian grain ships have been stuck in port.

Even more significant is that traders are holding back on making new deals due to the uncertainty, paralysing the grain markets. Traders are avoiding Russian grain, the production of which should be unaffected, but they are staying away due to the sanctions risk. Exporters are also avoiding doing deals, as they cannot be sure if they will be able to fulfil them due to the expanded fighting between Russia and Ukraine.

In addition to the shortages pushing prices up, the advent of war has also driven up insurance premiums for shipping, adding to the rising costs of grain.