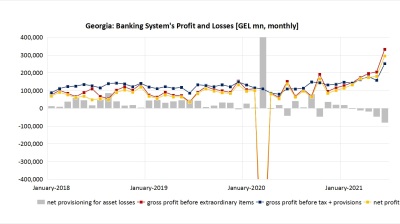 The aggregated net profit of Georgia's banks more than doubled in June compared to the same month last year, to Georgian lari (GEL) 295mn ($92mn) - it amounted to the biggest profit ever recorded by the banks in the country’s history.

In the second quarter of the year, the profit was GEL648mn (over $200mn), 140% up y/y, and in the ytd period of January-June the aggregated profits exceeded GEL1bn (over $300mn) - compared to GEL477bn losses in the first half of last year when the Georgian banks set aside GEL1.2bn in provisions for potential asset losses as a result of the crisis that was emerging.

The banks' profits are also in line with the forecast of the National Bank of Georgia (NBG), as Papuna Lezhava, NBG vice president said in June that the Georgian banking system was expected to make a “pretty solid profit" this year.

The banking system remains adequately capitalised and liquid, the International Monetary Fund (IMF) said in its Concluding Remarks after Article IV Consultations with the country.

Stress tests conducted in the recent Financial Sector Assessment Program (FSAP) mission confirmed that banks have sufficient capital to absorb credit losses stemming from the pandemic under a conservative baseline scenario over the next three years. Under the stress scenario of an extended pandemic and an adverse external financial environment, capital shortfalls are not deemed substantial and are assessed to be manageable from a systemic perspective.

Nevertheless, the IMF recommends that financial sector policies should now aim to maintain adequate buffers and provisions in the banking sector, amidst signs of recovery.

The NBG should ask banks to preserve sufficient retained earnings until significant downside risks to the economy recede and identifying effective ways to resolve non-performing loans (NPLs) remains important - even though they appear to be falling from a peak of 8.5% in March 2021 and have been significantly provisioned.