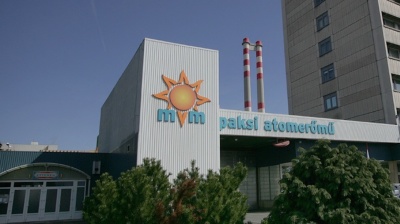 The tender for the extension of the cooling canal system at the Paks nuclear power plant, a key safety investment, has been declared invalid, which will further delay the project, already behind schedule by at least two years, local media reported on September 28.

Hungary is expanding its sole nuclear power plant in Paks, which accounts for 40% of the electricity produced in the country. Based on a 2014 intergovernmental contract, Hungary picked Rosatom for the largest ever investment. The €12.5bn project is being financed from a €10bn Russian loan.

Parbeszed MEP Benedek Javor reported on his blog that Russia’s Rosatom, the main constructor of the project, had received no valid bids to extend the cooling canal system.

There are numerous other procurement tenders that have been rendered invalid due to the lack of interest or the failure to meet criteria.

"The series of unsuccessful procurements show that market participants are simply not interested in the project, and it may prove to be difficult to get the right companies and professionals engaged in the construction,” Javor said.

Expanding the cooling-water discharge capacities at Paks is one of the most important projects environmentally. In the summer the temperature at spots where cooling water is discharged to the Danube almost exceeded regulatory limits. If they had been breached, the power plant would have had to be shut down.

As the capacity of the Paks nuclear power plant will double from 2,000Mw to 4,400Mw by adding two new blocks, the cooling-water discharge capacities will rise from 100 m3/s to 232 m3/s.

The delay at Paks was discussed during Prime Minister Viktor Orban’s talks with Russian President Vladimir Putin in September. The Hungarian PM blamed “the bureaucratic practices of the European Union” for the delay, but in fact the Hungarian authorities have also been late issuing licenses.

The minister without portfolio for the Paks expansion told the parliament’s economic committee in May that the project is 22 months behind schedule because of the earlier challenges launched by the European Commission and because of amendments to contracts, therefore the two new units will not be completed before 2026 or 2027.

In related news, block three of the nuclear power plant has been running at reduced capacity since early Friday morning because of scheduled repairs. The event has no impact on nuclear safety and on the operation of the other blocks, according to information on MVM Paksi Atomeromu's website.