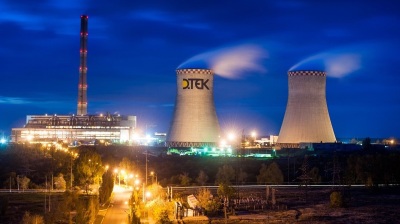 The European gas crisis is having a knock-on effect in Ukraine which is also seeing shortages of coal and imported power. It could face a debilitating energy crisis this winter. / wiki
By FPRI BMB Ukraine November 18, 2021

The geopolitical conflict over energy, particularly gas with the impending (though temporarily suspended) certification of Nord Stream 2, appears to be spilling over into the coal and electricity sector, putting Ukraine on the verge of a potential energy crisis.

Despite producing most of its electricity from nuclear power, Ukraine is still highly dependent on external energy sources. Coal-fired power capacity amounts to nearly 40% of the total installed capacity, but not all of it is used.

Ukraine lost access to dozens of coal mines in Donbas after 2014, many of which produced a cleaner coal called anthracite needed to fuel strategic Ukrainian power plants. As a result, Kyiv had to resort to importing coal from Russia to cope with this loss, with supplies sometimes coming from their own uncontrolled territories despite a ban. Amid the conflict, Russia became the largest exporter of thermal coal to Ukraine, accounting for two-thirds of imports by volume, and one-third of Ukraine's coal consumption this year.

But as of November 1, Russia halted shipments of anthracite to Ukraine, arguing that it was temporarily needed for domestic consumption. Meanwhile, Moscow ramped up exports to other countries. Ukraine therefore turned to other countries like the United States, Poland, and Kazakhstan to import thermal coal – an alternative that may prove costly, as many countries rushed to this cheaper, dirtier source of energy amid soaring gas prices this year.

Russia’s decision comes as thermal coal stockpiles are already low, pushing Kyiv to lift a ban on electricity imports from Russia and its ally Belarus. Nevertheless, as a part of its geopolitical shift toward the West, Ukraine wants to complete the synchronisation of its electricity grid with the European power system by 2023.

With Russia refusing to import coal or electricity from its Ukrainian neighbour and depriving the country of billions in transit revenues through alternative gas routes, some experts believe that both moves are part of a single Kremlin strategy aimed at putting pressure on Kyiv. Russia indeed cancelled a power auction that had been scheduled for October 21, while Belarus announced on Wednesday that it will stop exporting electricity to Ukraine from Thursday, November 18.

Electricity is a sensitive topic for the Ukrainian population, as many struggle to make ends meet. “Blackouts can only scare those who have disabled logic and critical thinking,” President Zelenskiy assured in an address on Monday, urging citizens to ignore “false statements” from “biased” television channels. “It’s better not to watch them at all – it saves [your] nerves and electricity,” he quipped.

Zelenskiy also announced that the Ukrainian government had purchased several ships meant to deliver coal by sea by the end of the month. Moreover, in recent weeks, two additional units were brought online at the Rivne and Zaporizhia nuclear power plants (NPPs). An additional unit will also be launched at the Zaporizhia NPP by the end of November.

In the long term, Ukraine promised at the COP26 Climate Summit to phase out its use of coal for electricity generation by 2035, in a bid to reduce its emissions and external energy dependence.