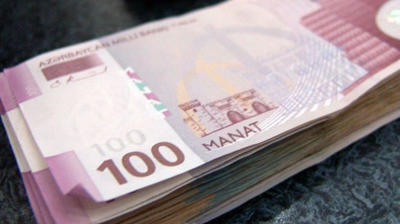 Top government officials have said the country is not under pressure to devalue the Azerbaijani manat.
By bne IntelIiNews April 28, 2020

Azerbaijan's central bank on April 27 placed four of the country's top banks under temporary administration with the asphyxiating economic effects of the coronavirus (COVID-19) pandemic clearly being felt by the country’s financial sector.

Temporary administrators have been appointed for Atabank, AGBank, NBCBank and Amrah Bank, each of which are among Azerbaijan’s 15 largest financial institutions. No official explanations were given for the move, but there is speculation on the market that the banks could face closure or could be merged with other lenders. The central bank has also reduced the amount of capital Azerbaijan’s banks have to hold, implying that they were having trouble meeting the old requirements.

The oil price collapse is hitting Azerbaijan hard, just as the previous price crisis in 2014 did. The oil and natural gas sectors make up 45% of its $45bn economy. Last week saw Baku forced, for the first time ever, to tell BP that it would have to cut Caspian Sea oil production to help the country comply with an OPEC+ deal to stem the flow of crude on to decimated markets and lift prices, while Azerbaijan’s sovereign wealth fund—the State Oil Fund of Azerbaijan, or SOFAZ—has lately spent $2bn defending the Azerbaijani manat (AZN).

A central bank source told Reuters that “all four banks had been facing liquidity and financial sustainability problems”. Interfax, meanwhile, quoted a source at the regulator as saying: “The order affects deposits totalling 7.3 billion manats [$4.3bn] and protects the interests of 8.3 million people.”

As early as February, the central bank said it had identified “serious financial problems” at Atabank, citing a large number of high-risk loans. AtaBank merged with the Azeri Caspian Development Bank in April 2017. Its capital is 600mn manats ($353mn).

Azerbaijan has a relatively small banking sector, with 30 lenders in all. But the bailout three years ago of its largest bank, the state-run International Bank of Azerbaijan (IBA), cost the state budget billions of dollars. Last October, IBA said it was embarking on a three-year development strategy that would prepare the lender for its delayed privatisation. It also said it planned to set up its own investment company.

Top government officials have recently made upbeat statements, saying that the country would not be forced to devalue the manat, which it did twice in 2015 causing substantial hardship for ordinary Azerbaijanis with manat savings.

In another move to shore up the banking sector, President Ilham Aliyev has signed an order extending the term for which bank deposits are guaranteed by the government.

“I think this is not the end, the process of closing or merging banks will probably continue during the year,” economist Gubad Ibadoglu wrote on his Facebook page, as reported by Eurasianet.

Ibadoglu added that the current banking crisis was rooted in more systemic problems in the sector, which is controlled by politically well-connected figures in the hydrocarbon-rich country.

“Unfortunately, in 28 years [of independence], a healthy and competitive banking market has not been formed in Azerbaijan, and banking management that meets modern corporate standards has not been established. The costs of all this will be borne primarily by bank customers, who again will be the most affected population. Account funds will not be returned to the owners in full,” Ibadoglu wrote in another post.

“It is not easy to make a forecast in the current uncertainty. Or if the devaluation of the manat takes place in a few months, then who will pay for the devaluation of manat deposits in banks that closed yesterday? How will these types of risks be managed? The Central Bank must also answer these questions.”