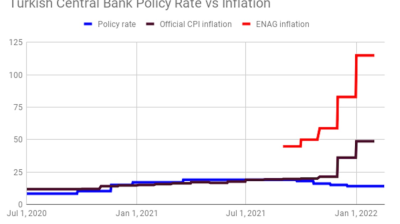 It downgraded the country’s long-term foreign currency issuer default rating (IDR) to 'B+' from 'BB-”, taking it to four notches below investment grade and placing the rating on a par with those of Egypt, Benin, Turkmenistan and Rwanda. The outlook for Turkey is negative, Fitch added.

The ratings agency assessed that the main initiative of the Erdogan administration’s plan to stabilise the country’s crisis-stricken economy—exchange rate-linked savings schemes—would not “sustainably ease macroeconomic and financial stability risks”. The new savings schemes’ capacity to “sustainably improve confidence” was limited, Fitch said, cautioning that, if the measures failed to curb dollarisation in the domestic economy, authorities might have to resort to either burning through more central bank reserves or further capital controls. “This policy response could in turn have a negative effect on domestic confidence,” it said.

The risk of additional destabilising monetary policy easing or stimulus policies ahead of the 2023 elections was high, and there was an elevated degree of uncertainty about the authorities' policy reaction function in the event of another episode of financial stress as political considerations limit the central bank's ability to raise its policy rate, according to Fitch.

It is widely perceived that President Recep Tayyip Erdogan has the final word on Turkey’s monetary policy. Last year, while most emerging markets were raising rates to defend their currencies from global price pressures, the Turkish central bank lowered its policy rate by as much as 500 bp from September to December.

The lira lost as much as half its value against the dollar before the government made some interventions at the end of December to put a brake on the decline. Official annual inflation climbed to 48.7% in Turkey in January, though the ENAG research group led by Istanbul academics calculated that in reality it was 116%. The policy rate stands at 14%.

Erdogan has declared that he has introduced a “new economic model” that he claims will cure the country’s structural economic imbalances by taking advantage of a weaker, more competitive lira to drive up exports, investment and employment.

Turkey’s finance minister has forecast that inflation will fall into the single digits by May next year. Fitch, on the other hand, said it expected average inflation of 41% in 2022 and 28% in 2023.