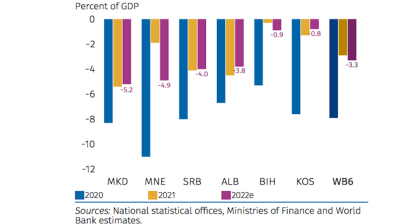 Growth has slowed in the Western Balkans region but this year’s average expansion is expected to come in at 3.4%, or 0.6 of a percentage point (pp) above the EU average, the World Bank said in its latest report on the region on October 24.

With the region “heading into another storm”, the World Bank warned that the six Western Balkans countries need policies to protect most vulnerable households and firms as the region continued to be affected by the war in Ukraine.

The development bank highlighted the fiscal pressures faced in the region, where the average fiscal deficit in 2022 is expected to increase by 0.4 pp as a share of GDP compared to last year.

In the Western Balkan Regular Economic Report, the World Bank said that the economic performance of the six countries are impacted by the sharp increase in energy prices and slowdown in global growth as a result of the war.

The World Bank said that the growth momentum in the first half of 2022, driven by private consumption and investment, is now beginning to slow due to the mounting challenges.

"Higher energy and food prices have pushed inflation to levels unseen for many years, eroding purchasing power and business confidence. The labour market is beginning to cool, with employment slowing amid the high inflation and increased uncertainty," the World Bank said.

It was warned that the rising inflation poses risks to poverty reduction going forward.

“In the absence of government support, the severity of the energy and food price shocks could result in a 13% increase in the number of the poor in the Western Balkans,” the report said.

World Bank's country director for the Western Balkans, Xiaoqing Yu, noted that the governments of the six Western Balkans countries are taking measures to curb rising inflation and energy crisis, but underlined it is crucial that such measures mitigate the impacts of these crises on the most vulnerable households and firms. 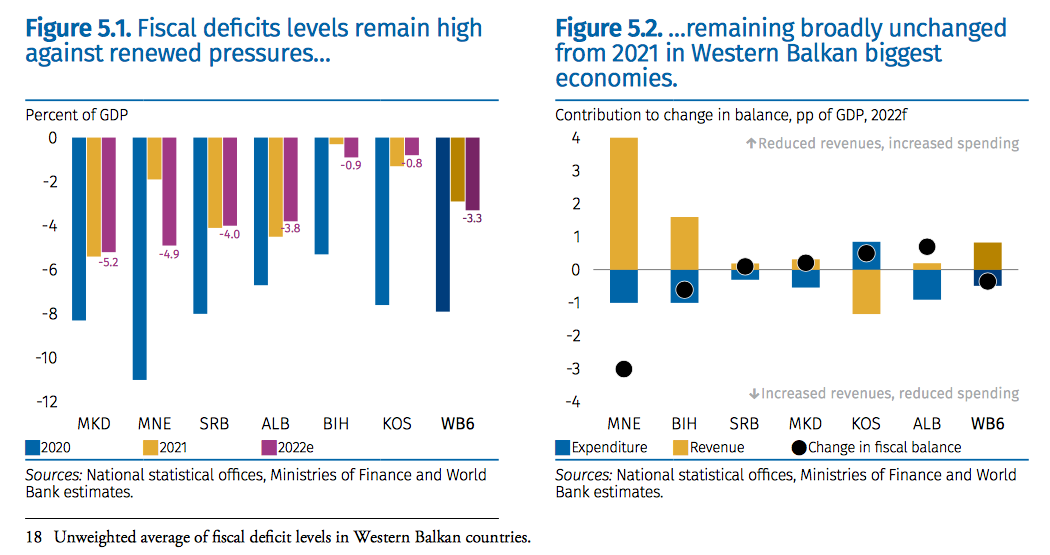 It was suggested that reforms should include measures to increase the level of market competition, remove entry barriers to business, increase retention and reinvestment among foreign investors, reduce barriers to female labour force participation, improve quality of education, and raise standards of governance, including digitalisation.

The ongoing crisis also highlights the need to accelerate the green transition in the region.

Massimiliano Paolucci, the World Bank's country manager for North Macedonia and Kosovo, said that government’s policy support to the energy vulnerable is an important step in the right direction, but measures need to be targeted and timebound to minimise fiscal risks.

"At the same time, the focus should also continue to be on long-delayed structural reforms to boost growth and create new jobs," Paolucci said.

Country manager for Serbia, Nicola Pontara, said that while growth projections for Serbia in 2022 and over the medium term remain unchanged, risks to this outlook are tilted to the downside.

"Costly energy imports have led to a significant deterioration of the current account deficit, which could widen to as much as 10% of GDP in 2022, while inflation remains stubbornly high," Pontara said.

Shaken by the Ukraine war

In Bosnia & Herzegovina, economic growth is expected to be strongly affected by the economic consequences from the Russian war in Ukraine in the mid-term.

“This combination of shocks is impacting the region’s outlook. BiH’s tight connection with the region and tighter global financing conditions, as well as expected slowdown in both domestic and external demand, will impact the BiH outlook as well,” Christopher Sheldon, World Bank country manager for Bosnia and Montenegro, said.

“With limited fiscal space, elevated public debt, and increased costs of financing, prudent fiscal management is becoming an imperative for Montenegro. At the same time, the focus should return to structural reforms to boost growth and create new jobs,” Sheldon noted.

He added that such reforms would include measures to boost the market competition, remove entry barriers to business, increase retention and reinvestment by foreign investors, reduce barriers to female labor force participation, improve quality of education, and raise standards of governance, including digitalisation.

Similarly, Albania’s GDP growth is expected to decelerate during the remainder of the year, the World Bank said, pointed to the impact of rising inflation on Albanians’ real disposable income combined with the slowdown in the global economy that is resulting in tighter financing conditions and lower foreign demand.

Albania’s medium-term prospects “hinge on the global recovery and structural reforms, and on the launch fiscal consolidation,” the World Bank said.

Hungary’s GDP growth slows to 4.0% in Q3
21 hours ago
Poll shows only one in five Moldovans happy with their government
22 hours ago
Montenegro’s tourist arrivals almost double y/y in October
22 hours ago
LNG in Europe: ready or not?
22 hours ago
Russia’s GDP at 4.4% decline in October, construction and agro stick out
22 hours ago