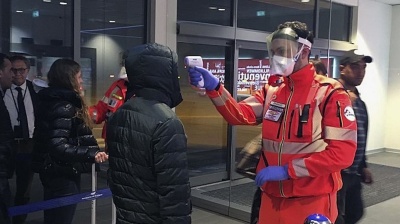 The first coronavirus case in Croatia was confirmed by the country’s Prime Minister Andrej Plenkovic on February 25.

Croatia, and other states from the region including Albania, Bulgaria and Slovenia, were already on alert for possible cases following the rapid spread of the infection in several parts of northern Italy.

According to Croatian Health Minister Vili Beros, the victim had been in Milan from February 19 to February 21.

“The patient is in the Zagreb clinic for infectious diseases. He is a younger person and has milder symptoms. He is in isolation and his condition is good at the moment,” Plenkovic told a press conference after a meeting at the National Civil Protection Headquarters in Banski Dvori.

Plenkovic added that the National Civil Protection Headquarters, which is led by Deputy Prime Minister and Interior Minister Davor Bozinovic, would meet as needed to coordinate all activities.

Bozinovic will convene the heads of county civil protection headquarters on February 26, as Zagreb seeks to prevent the spread of the coronavirus.

"In the light of developments in Italy, we will ensure that all relevant services — from the Ministry of Health, the Ministry of the Interior, the State Inspectorate, all competent authorities, especially epidemiological ones — are fully prepared and active in preventing the spread of the coronavirus," he said.

Beros, who is leaving for a meeting on the issue on Italy today along with ministers from other countries in the region, told the same press conference that people who had been in contact with the patient would be quarantined.

No results are yet available from tests on nine Croatian citizens in Rijeka, who worked in a factory in northern Italy where twenty people became infected.

Both he and Plenkovic sought to reassure Croatian citizens. The prime minister told the press conference that the Croatian healthcare system is able to deal with the coronavirus threat.

"Citizens can continue to live their lives normally, but we will take appropriate precautions," Plenkovic added.