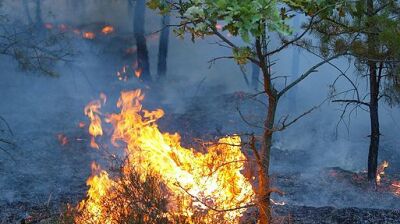 Fires caused by the extremely hot weather are still active in parts of North Macedonia, but have caused no deaths or injuries, while firefighters and the army are trying to bring all of them under control, officials said on August 3.

North Macedonia, as well as other countries in Southeast Europe, has been hit by a heatwave that has sent soaring temperatures to 40°C or higher in parts of the region, causing wildfires, threatening human health and disrupting some industries. Weather forecasts show that temperatures above 40 degrees in some regions of North Macedonia will persist at least until Friday.

“Currently, 13 fires are still active, most of them are localised. Fires in Kocani are under control, while more intensive efforts are being made in Staro Nagoricane [in the northeast], where firefighters sent the most of their staff and equipment,” Prime Minister Zoran Zaev said in a Facebook post on August 3.

The eastern town of Kocani, known for its paddy fields, and its surroundings was one of the most affected, with the fires threatening the central area of the city, but fortunately they have been localised during the night.

According to the Health Ministry, nine residents of Kocani sought medical help after they inhaled smoke from the fires, but all they have been allowed to retrun home.

The fire in Kocani left the city and the surroundings with burnt out cars, houses, livestock and hundreds of hectares of pine forest.

Other fires erupted in the region of capital Skopje, the northeastern towns of Kumanovo, Stip as well as Bitola and Strumica in the south.

“Material damage is something that we will compensate with joint efforts, but now the biggest concern of all of us must be our safety,” PM Zaev said.

The fires erupted as North Macedonia was celebrating the Day of Republic, Ilinden, the biggest national holiday in the country on August 2.

“The fires that affected the country brought a difficult Ilinden night, but thanks to the professionalism and solidarity of the firefighters and the citizens, there are still no injured or endangered people,” Zaev said.

According to latest media reports, a new fire erupted in the afternoon on August 3 at the border crossing at Bogorodica with Greece, putting at risk the Flamingo Casino and a filling station.

North Macedonia expects assistance from Serbia in extinguishing the fires as well as from Nato members in the region.

As a result of the situation, a total ban on movement in forest areas across the country took effect as of August 3.

Growth of North Macedonia’s PPI slows further to 22.3% y/y in October
European Parliament calls for ‘reenergised’ enlargement process – but only for countries that back Russia sanctions
IMF approves €530mn arrangement for North Macedonia