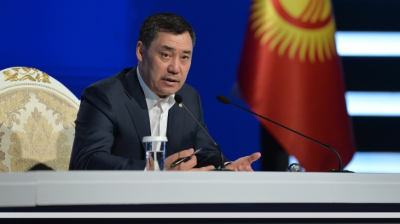 Populist politician Sadyr Japarov, sprung from prison during the political unrest that broke out in Kyrgyzstan last October, won a landslide victory on a low turnout in the snap presidential vote held on January 10.

The 52-year-old Japarov’s release from prison immediately led to him assuming the position of prime minister in October. He then quickly moved on to taking the role of interim president before he positioned himself to run for the permanent presidency. Japarov’s lengthy prison sentence was the result of the kidnapping of a provincial governor during protests over the Canadian-owned Kumtor gold mine.

The presidential election—triggered as a result of the previous government’s collapse amid protests that broke out after a parliamentary election was condemned by opposition groups as rigged—saw Japarov secure 79.2% of the vote, according to preliminary results put out by Kyrgyzstan’s Central Election Commission (CEC). CEC data showed that voter turnout stood at a mere 39.88% and, as such, Japarov’s victory may reflect a general disillusionment with the political process in Kyrgyzstan. It has been ridden by scandals, surprise twists and back-stabbings, with the Northern and Southern Kyrgyz elites squabbling over control.

Candidates in the vote "could mostly campaign freely" but the campaign was "dominated by one candidate [Japarov] who benefited from disproportionate financial means and misuse of administrative resources, resulting in an uneven playing field," the observers from the Organization for Security and Cooperation in Europe's (OSCE’s) Office for Democratic Institutions and Human Rights (ODIHR) and the OSCE Parliamentary Assembly (OSCE PA) said in a preliminary report on January 11.

The main downside of a new administration led by a populist may come in the form of a threat to foreign investment. Kyrgyz citizens have long perceived foreign-owned entities as benefiting from Kyrgyzstan’s natural resources such as gold at the expense of the population and the environment. Nationalistic attacks on foreign businesses were observed both during the upheaval in October during the fall of the Sooranbai Jeenbekov presidency and in other instances in recent years.

The fervent nationalist Japarov’s rise to power was met with concern by the US embassy in Bishkek last October. The mission referred to the political developments as amounting to a threat posed to democracy in Kyrgyzstan from organised crime.

Over 80% of voters also supported a constitutional reform proposal to grant sweeping powers to the president at the expense of parliament. The reform is set to enter force by June.

The changes to the constitution may put an end to Kyrgyzstan’s ambitions to remain a parliamentary democracy, which was originally formed to prevent the potential rise of a new dictator after Askar Akayev and Kurmanbek Bakiyev’s regimes were toppled in 2005 and 2010, respectively. Critics fear the constitutional changes could empower the presidency to operate in an authoritarian manner.
In late November, hundreds took to the streets in Bishkek to protest against the proposal to alter the constitution—sometimes referred to by opponents as the “Khanstitution”.

Japarov, sometimes known as the “Kyrgyz Donald Trump”, faced off against 16 presidential poll rivals, but his victory, along with the constitutional changes, may disguise a weak level of support for him across Kyrgyzstan given the low turnout. Extreme cold was blamed by officials for keeping many voters away from the polling stations.

“I am assuming power at a time of hardship and crisis,” Japarov said following the announcement of his victory. “One or two years will not be enough to fix everything, we can do it in three or four years and it will require stability.”

"There will be no dictatorship as some scaremongers say. There will be a dictatorship of law and justice," Japarov added, borrowing a phrase from Russian leader Vladimir Putin, whose country is a key ally for Kyrgyzstan, where it has a military base.

Despite all the talk of stability, Japarov’s presidency may not fare well in a country all too used to solving political conflict violently—especially if Japarov attempts to succeed where Akayev and Bakiyev have already failed.