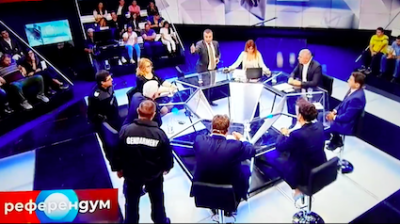 A furious argument between two far-right politicians during a public debate marred the formal launch of the local election campaign in Bulgaria.

The country will vote on October 27 for local mayors in an election that is seen as decisive for the future of the government of third-time Prime Minister Boyko Borissov, and the campaign is expected to be very tense.

Late on October 1, Volen Siderov, the leader of far-right Ataka, who is running for mayor of Sofia, provoked a scandal during the debate on public broadcaster BNT’s Referendum show, with a verbal attack on Iulian Angelov, the head of fellow far-right party VMRO’s election team.

The two parties were members of the far-right coalition the United Patriots, the junior partner of Borissov’s ruling Gerb party. However, several months ago their coalition collapsed after VMRO and the third member, the National Front for Salvation of Bulgaria, decided to expel Siderov and his party members. Despite that, all three parties are still members of the ruling coalition, though they are running separately in the local elections.

At the beginning of the Referendum show, Siderov attacked VMRO’s candidate for Sofia mayor, the MEP Angel Dzhambazki, calling him a “gay who should head the gay parade”.

Although BNT deleted the recording of the show, it was previously saved by several online media, including Clubz.bg.

“You made the gay Dzhambazki MEP. [The ethnic-Turk Movement for Rights and Freedoms] DPS is running the state through VMRO and its leader Krassimir Karakachanov,” Siderov said.

As Siderov refused to calm down and allow the show to continue, the host Dobrina Ceshmedzhieva first asked for his microphone to be silenced and then called the police to intervene. Siderov was removed from the studio by two policemen deployed to guard BNT.

On the next day, BNT issued a declaration condemning Siderov’s behaviour and saying it will propose to the central election committee and the Council for Electronic Media to exclude Ataka from a previously signed agreement for free and paid coverage of the election campaign.

Siderov’s behaviour was far from unexpected as it follows many cases when he has resorted to verbal or physical violence in the past. He has many times started physical fights, as well as offended people and parties, even breaking into BNT’s offices. Although he has been under investigation several times, he has never been sentenced.

The parliament voted to lift Siderov’s immunity after he harassed students from the National Academy for Theatre and Film Arts (NATFA) in Sofia on several occasions. Claiming he had information about drug dealing and drugs hidden in the building, he made several personal inspections at small shops around the university. On October 23 2015 — shortly before Bulgaria’s last local elections — Siderov and around a dozen Ataka supporters entered NATFA's building, and allegedly shouted insults and tried to beat students. Two days later, after polls closed, Siderov and his supporters again visited NATFA, angering students and local residents. Police had to rescue Siderov from the angry crowd, but not before a man managed to hit him in the face.