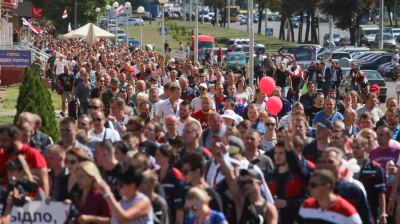 Factory workers heckle Lukashenko at a truck maker as he continues to try to shore up his base, and fails. / wiki
By Ben Aris in Berlin August 17, 2020

Factory workers at MZKT, which makes military trucks, heckled Belarus’ self-appointed President Alexander Lukashenko at a rally on August 17 in what some are calling his “Ceausescu moment,” after which he said a power-sharing deal was possible.

The strongman, who has led the country for 26 years, looked at a loss and nervously played with his jacket as he stood in front of what was supposed to be a loyal crowd. Lukashenko has long enjoyed genuine support amongst Belarus’ working class.

“I, like you, am not sure of what the problem is,” Lukashenko said as the crowd of workers chanted “ukhodi!” which translates as “get out” or “resign.” After facing down the crowd for a few moments he lamely concluded with “Thank you.”

“There will be no new elections. We can have elections when I’m dead,” he told the workers. “Thank you. I said everything. You may now chant “resign”,” Lukashenko said and walked away from the microphone back to his waiting helicopter.

The meeting was the second PR disaster for Lukashenko in two days. On August 16 he organised a pro-government rally in central Minsk where hundreds of workers were bussed in from regional factories. However, the crowd was only 4,000-5,000 strong, according to unofficial estimates, and not the 65,000 people officials claim, and Lukashenko pep-rally was quickly eclipsed by an anti-government rally on Independence Square that had up to 200,000 participants.

Several commentators pointed to the similarity with the last speech Romania’s former dictator, Nicolae Ceausescu, made shortly before he fell from power and was executed. Also facing large-scale protests, Ceausescu too held a big rally, only to stand on a balcony and face the crowd that started to boo him to his astonishment. He was executed shortly afterwards.

While Lukashenko was speaking thousands of workers answered a call to rally put out by Nexta the day before in a display of defiance against the authorities.

“While Lukashenko is trying to extinguish the flame, thousands of workers are marching [on] Minsk streets. They are chanting: "Truth!"; "Join us!"; "Tribunal for Lukashenka"; "Freedom!",” tweeted Tadeusz Giczan, a  Belarusian PhD candidate at University College London School of Slavonic & East European Studies. 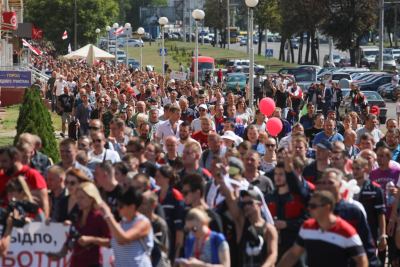 Backed into a corner Lukashenko seemed to make his first concession to the protestors shortly after the MZKT factory visit and offered to share power after the constitution is changed by referendum. However, he said a deal was “not possible under the pressure of street protests.”

Lukashenko said work is underway to draft amendments to the country's constitution, which would deal with power redistribution, the state news agency BelTA reported.

Commentators are sceptical and believe the offer is simply a delaying tactic, as Lukashenko hopes the protests will fizzle out. A referendum would take weeks to organise, leaving Lukashenko in office in the meantime. Lukashenko has talked many times about changing the constitution and repeated promises to review it during the run-up to the August 9 presidential election.

The opposition are attempting to open negotiations with the Lukashenko administration. Maria Kolesnikova, the only one of the trio of women that campaigned against Lukashenko in the presidential elections still in Belarus, said in an interview on August 16 that their team had been trying to contact Lukashenko for days without success. Kolesnikova is actively participating in the demonstrations and was in the crowd at the MZKT meeting and also appeared at the picket line outside the state broadcaster.

Former English teacher and nominal victor in Belarus’ presidential election Svetlana Tikhanovskaya said in a video message released on August 16 that she was ready to take up the role of "national leader" to calm the unrest and end the current political crisis.

In the meantime, the general strike is expanding, with more state-owned enterprises joining. The most significant action was when workers at the channel 1, the biggest of the state broadcasters, walked off the job. Most Belarusians get the majority of their information from the TV, which has been totally under Lukashenko’s control, but today the service went blank.

At the same time, other state-owned channels broadcast Lukashenko’s humiliation in front of the protesting workers at the MZKT plant visit.

There were also reports of trucks of soldiers moving up the Belarus-Russian border shared on social media. The Telegram channel Nexta, which has been the main application used by the protestors to communicate, share information and co-ordinate their actions, said that it was following the situation closely and trying to verify the footage.

With Lukashenko all out of options speculation has begun on whether he will try to declare martial law. Belarus watchers are dubious about whether the president will attempt such a drastic move, partly as there is no justification for it and the army’s loyalty is in question.

With defections from amongst the elite the declaration of martial law could be the event that pushes the elite over the top to turn on Lukashenko in a palace coup. The alternative could be bloodshed. There seems to be little stomach amongst most of the security forces for more violence following the failure of Lukashenko’s attempt to intimidate the population by unleashing a brutal police crackdown in the first few days following the elections.

Speaking in Vitebsk in July, state secretary Andrei Ravkov announced that the deployment of armed forces within the country would be carried out in accordance with the new military doctrine adopted in 2018 in what appear to be contingency plans made by the government anticipating trouble during August’s elections. In July Ravkov specifically warned that present day armed conflicts start with street demonstrations

As early as May this year, two mid-level Belarusian government officials speaking independently to Belarus Digest, a local news outlet, spoke of plans to deploy the army if needed during the election.

During June and July Lukashenko also toured several military establishments, including the 38th brigade in Brest, 103rd brigade in Vitebsk and 5th Brigade near Minsk. He also visited the key 3214th Unit of Internal troops usually deployed in Minsk. During the recent army reform some 15,000 men were chosen to become the core of a new, compact and mobile military unit that received more financing and new equipment. Lukashenko was reportedly hoping to secure the troops' loyalty by spending more money on them and providing perks such as free housing.

So far the military, which has no training in riot control, has not been deployed during the current crisis.