Every fifth Russian worker earns less than $250 per month 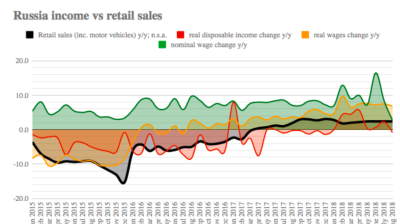 Every fifth Russian worker earns less than RUB15,000 ($250) per month, according to the results of a study by the RIA Rating agency, which RIA Novosti cites .

As bne IntelliNews reported in September the salaries in the regions are well behind the national average. In general the average incomes in the remote mineral producing regions are a lot higher than those in the European part of the country, especially in the Volga basin. However, the cost of living in the remote regions is much higher due to difficult logistics and this cancels out most of the gains.

Half the workers in Russia receive an average salary in the range of RUB17,000-RUB44,000 per month, the study found.

Croatia to be among countries worst hit by tourism collapse this year, says UNCTAD
21 hours ago
Russians, Serbians, Turks the biggest property buyers in Montenegro
1 day ago
Polish PMI advances but remains below 50 points as restrictions lifted
1 day ago
Czech PMI slightly up in June but still under 50-point threshold
1 day ago
Russian corporate profits recovering, but still down by half on 2019 in April
2 days ago