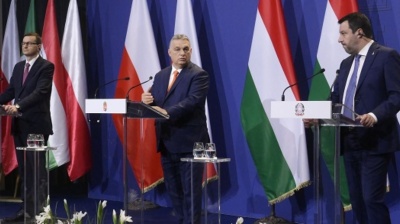 Hungarian Prime Minister Viktor Orban was host to his Polish counterpart, Mateus Morawiecki, and former Italian interior minister and head of the Lega party Matteo Salvini in Budapest on April 1 to discuss a potential rightwing alliance of the three nationalist parties at the European level.

It marked the first summit between the three after the exit of Fidesz from the European People's Party (EPP), which will be followed by meetings in Rome and Warsaw, according to plans.

Hungarian pro-government analysts said this marked the first step in the creation of a common platform and the start of building a new alliance between Fidesz, Lega and the PiS. Independent analysts said the parties laid the groundwork for future cooperation without any substantive result as the devil is in the details.

Lega is part of the 76-member rightwing populist and Eurosceptic alliance, the Identity and Democracy Party (ID), with 29 members in the EPP. PiS and a smaller ally hold 27 seats in the European Conservatives and Reformists bloc, making the Polish ruling party the largest faction in the group of 62.

Fidesz has 11 seats in the EP and had the highest ratio of fraction members per inhabitants when it was in the EPP. If the three parties were to join forces, it could create the third-largest faction in the European Parliament.

At the meeting, the three leaders agreed to launch the project of a "European renaissance, or an alternative vision to that of a bureaucratic EU that has drifted from the citizens" at the meeting.

"We are going to launch a new platform, an organisation, a process which will give those citizens who believe in a traditional Europe the representation that they deserve", Orban said at the joint press conference in Budapest.

"We also say no to censorship, to Brussels imperial plans, illegal migration and Anti-Semitism."

PiS and Fidesz have become strategic allies over the years, which stems from a common ideological background.Poland and Hungary have come under criticism from the European Union for their illiberal and authoritarian shift in recent years.

The Commission launched Article 7 procedures against Poland and Hungary for the breach of democratic values, including the independence of the judiciary, media pluralism and academic freedom. Just last week Poland was referred to the European Court of Justice to protect the independence of judges.

The procedure against the two countries could ultimately end in sanctions and strip them of their voting rights in the European Council, but that is highly unlikely as Poland and Hungary vowed to block any such initiative to protect the other.

The Polish conservatives would like to see the ECR expanding with 11 Fidesz MEPs, who quit the EPP last month to avoid an embarrassing expulsion.

Hungarian analysts said the only stumbling block in the PiS-Fidesz relationship is the stance toward Russia. Poland sees its neighbour as a threat, unlike Hungary, which has built up cosy ties with Moscow since Orban came into power in 2010.

Morawiecki stressed the need for Europe to return to its Christian roots, whilst calling the respect for sovereign states in Europe.

At the press conference, Orban called the former Italian interior minister a hero once again for defending his country’s borders from illegal migration.

Before the talks, Salvini said that he would like to see ECR and the ID unite into a single-party family.

Sources close to Italy’s Sole 24 said that the chef of Lega party went into the Budapest talks with the goal of pushing for synergies between the ID and ECR and not with the aim of launching a new parliamentary group.