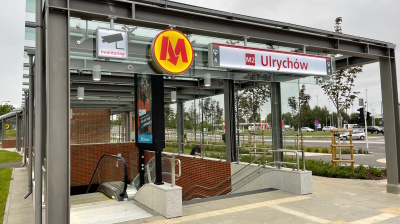 Majority EU-financed projects such as the Warsaw metro could now be in danger if Brussels freezes funding. / bne IntelliNews
By Wojciech Kosc in Warsaw October 17, 2022

The European Commission will freeze a substantial part of its Cohesions Funds to Poland unless Warsaw backtracks on its contested judiciary reforms, Polish and international media reported on October 17. The reports were immediately denied by Poland's radical right-wing government.

If true, the move would show that Brussels is no longer penalising Warsaw for what it regards as Warsaw's violations of the rule of law by just withholding the payments from the  EU’s Recovery and Resilience Fund (RRF) as previously, but is now using the much larger Cohesion Funds.

It would put Poland in the same basket as Viktor Orban's Hungary, which is also facing a freeze of both RRF and Cohesion Funds, and indicate that both sides are now digging in for a long conflict that could last until until Poland's general election next year.

Reportedly at stake now is €75bn in Cohesion funding, which Brussels earmarked for Poland in its budget for the years 2021-2027, as well as €31bn from a separate funding pool to be directed at Polish regions. Only 1%-1.5% of cohesion pre-financing has been made available, the newspaper Rzeczpospolita reported.

At the centre of the tussle over the funds – of which Poland has long been the EU’s largest net recipient by far – is the Law and Justice (PiS) government’s overhaul of the judiciary, specifically a new disciplinary regime for judges. Brussels argues this overhaul would allow political  interference in the independence of the judiciary, a violation of one of the key EU principles.

Even though Poland has removed the controversial Disciplinary Chamber of the Supreme Court, Brussels remains sceptical as to the real depth of the reform.

Prime Minister Mateusz Morawiecki said last month that Brussels had broken an agreement to release the RRF funds in return for abolishing the Disciplinary Chamber and that Poland would make no more concessions on the rule of law.

The Commission keeps hinting strongly that the changes were but a smokescreen, as appointments to the new body that replaced the chamber still did not meet the criteria of impartiality and independence from the government.

Poland also needs to reinstate judges suspended under the disciplinary regime and grant judges the right to ask the Court of Justice of the European Union – the bloc’s top court – questions on the interpretation of EU law.

The removal of the Disciplinary Chamber, reinstating judges, and granting the right to reach out to the CJEU are the three so-called milestones Poland agreed to meet in line with a compromise deal reached with Brussels earlier this year.

The deal allowed Brussels to rubber-stamp Poland’s plan to spend €36bn from the EU’s Recovery and Resilience Fund to help the bloc rebuild after the COVID-19 pandemic, payments from which have been on hold due to the feud over the judiciary.

The Commission has since grown ever more suspicious of Poland and has now said that not just the Recovery Fund but also other funds will be withheld, as infringements of judicial independence violate the EU’s charter of fundamental rights, compliance with which  is now an essential part of the EU’s budget rules under the so-called Conditionality Mechanism.

Poland appears unfazed by the revelations.

“Funds will be accessible, under [the Recovery Fund] and Cohesion, in due time,” a Polish official told the Financial Times, adding that “payment requests under the new round of Cohesion funding would only start to be made next year, by which time the rule of law situation would hopefully be resolved”.

The government officially denied that Cohesion Funds were in question. Janusz Wojciechowski, Poland's Commissioner for Agriculture, said that "Poland is not in danger of having agricultural and Cohesion funds withheld."

Poland’s judiciary reforms go to the heart of the government’s broader stance on member states’ position in the EU.

Brussels can only have so much say over member states’ rights, the PiS government has long said, warning that the bloc’s institutions – the Commission in particular – keep usurping more and more power, effectively turning the EU into a federalist super-state.

At a rally of the Spanish Euro-sceptic party VOX in Madrid earlier this month, Poland’s Prime Minister Mateusz Morawiecki said that the EU was growing into a “transnational beast without real and traditional values, without soul”.

Poland’s stance on the EU is also the effect of the PiS-led government’s political position at home.

PiS is in a coalition with a strongly anti-EU United Poland without which it would lose its razor-thin majority in the parliament.

Some observers say that the government’s anti-EU rhetoric is poised to intensify in the run-up to the general election due in the autumn of 2023.

PiS has already begun playing a patriotic tune of Germany-dominated EU trying to subjugate Poland for leading the charge against Brussels bureaucrats. The government media increasingly portray the opposition as working for German, rather than Polish, interests. It has even tried to claim PLN6.23 trillion (€1.32 trillion) in damages from Germany for the devastation of Poland in the Second World War.

A harbinger of Warsaw’s upcoming combative approach to the EU was the replacement of EU Affairs Minister Konrad Szymanski – seen as the government’s most pro-EU figure – with the much more confrontational Szymon Szynkowski vel Sek last week.

Meanwhile, Poland’s local governments – many of which are opposition-controlled – say that withdrawal of especially regional funds is a disaster scenario.

“We have plans for thermal modernisation of educational facilities and for a railway link to the southern districts of the city. All this may fall through because of the PiS government’s incomprehensible ideology of eternal war with European institutions,” Aleksandra Dulkiewicz, mayor of Gdansk, one of Poland’s largest cities, told Rzeczpospolita.