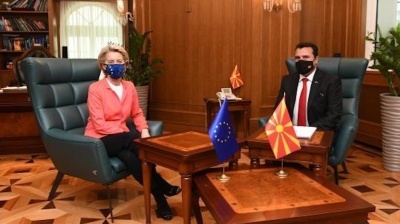 European Commission President Ursula von der Leyen said on September 28 that the EU's common goal is to launch accession negotiations with Albania and North Macedonia by the end of the year.

Von der Leyen visited Tirana and Skopje at the beginning of her Western Balkan tour, ahead of the European Council summit on the Western Balkans due to take place on October 6.

“I fully support, from the bottom of my heart, the formal opening of the accession negotiations. You have a partner in me, a strong supporter. And I want these accession negotiations opened with North Macedonia and Albania as soon as possible” von der Leyen said at a news conference in Skopje, the second leg of her tour.

Bulgaria vetoed the start of North Macedonia’s EU negotiations at the end of 2020 over language and historical issues, which also blocked Albania on its EU path, as the two countries' progress is linked.

Meanwhile, ahead of the summit Reuters reported that its diplomatic sources indicate EU members are divided over whether to restate a commitment from the bloc to “unequivocal support” for the European perspective of the Western Balkans, with several of the richer nations reportedly against this.

The European Commission first recommended the opening of accession negotiations with Tirana and Skopje in April 2018.

“Now let us go this extra mile, it will really pay off. You have our full support – you have many friends in the EU and in the Commission – and let us work hard, so that we reach our goal to have the first Intergovernmental Conference before the end of the year, that is our common goal,” she said at a news conference with North Macedonia’s PM Zoran Zaev.

Asked by journalists about the Bulgarian veto, von der Leyen said that there are many good ideas that could solve the problem.

Zaev stressed that a solution with Sofia will be sought based on European values, where identity issues would be respected. He said that there are positive signals.

The EU chief also praised North Macedonia for progress made on EU-related reforms, in particular on the rule of law, the fight against corruption and organised crime.

In Tirana, the European Commission head commended the Albanian authorities for delivering “all that we have been asking for”.

“And now it is us who have to deliver. We are starting the first Intergovernmental Conference, I am aware of that,” von der Leyen said.

Albania’s PM Edi Rama complained about the delay in the launch of EU membership talks, saying Bulgaria’s veto is holding the process hostage.

During her visits to two capitals, von der Leyen stressed that under the economic and investment plan for the Western Balkans the EU pledged €9bn.

“And important is for us – and that works very well – that you design, you propose the quality, the mature projects that are needed, so that together we can then leverage up to €20bn more in investment,” she said.

During the visit to Skopje, von der Leyen delivered the first tranche of a €2.6mn grant, out of a total of €15mn, for budget support for youth education and employment policies.

Von der Leyen will visit Kosovo, Montenegro and Serbia on September 29 and will end the regional tour with a visit to Bosnia & Herzegovina on September 30.

Ukraine will receive $5.5bn in support from the US later this month
1 hour ago
John Malkovich to turn Skopje into Hollywood of the Balkans
2 hours ago
Envoy says start made on construction of Turkish attack drone factory in Ukraine
11 hours ago
Huge explosion rocks Russian airbase on the Crimean peninsula
14 hours ago
Russia cuts oil flow via Ukraine's Druzhba pipeline, blaming sanctions for blocking transit payments
15 hours ago