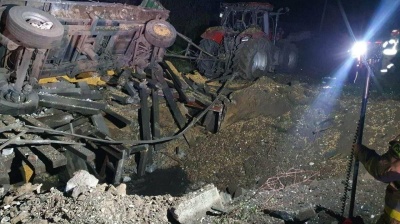 Two Russian rockets were thought to have fallen on a Polish village, killing two and setting off a storm of comment and calls for action as fears spread that the incident could spark WWIII. / bne IntelliNews
By Ben Aris in Berlin November 15, 2022

There was an instant storm of reaction after two Russian missiles were reported to have gone off course over Ukraine and hit a Polish village, killing two people, on November 15.

According to initial reports, one or two Russian missiles fell near the village of Przewodu in Lublin Voivodeship, on the border with Ukraine, where they hit a farm, killed two residents and destroyed a tractor. US intelligence sources initially said that the missiles came from Russia and crossed into Poland. US stocks reversed gains made earlier in the day and began to fall after the Polish strike news hit the wires.

Earlier, the confusion had led some to call for Poland to invoke Nato’s Article 5 that calls on all Nato members to come to the aid of any member that is attacked by a hostile power. There were fears that the apparent missile strike could be the “Sarajevo moment” of the Ukraine war, referring to the assassin’s attack in the Serbian capital that sparked World War I. Conspiracy theories of what actually happened abounded.

After the missile strike, Polish Prime Minister Mateusz Morawiecki convened an emergency meeting of the Committee of the Council of Ministers for National Security and Defence Affairs to consider Poland’s response. The Polish government also ordered its armed forces to be on high alert across the country.

Polish President Andrzej Duda called Nato chief Jens Stoltenberg and discussed the possibility of launching consultation amongst Nato under Article 4, which can be invoked if a country feels its integrity is under threat. He was also due to speak with US President Joe Biden later that evening.

“Spoke with President Duda about the explosion in Poland. I offered my condolences for the loss of life. Nato is monitoring the situation and Allies are closely consulting. Important that all facts are established,” Stoltenberg wrote on Twitter.

Some Polish media and officials initially claimed the Russian missiles hitting Polish territory amounted to a “deliberate provocation” with the aim of escalating the situation.

Separately, later the same day three people were reported killed by shelling in Russia’s Belgorod region, in the town of Shebekino close to the Ukrainian border. The region’s governor, Vyacheslav Gladkov, wrote that projectiles had also damaged the roof and the heating system of a two-storey apartment building. Windows were shattered in two neighbouring apartment buildings.  A local crystal shop, Belogorie Crystal, was also struck by shells, reported opposition Russian media outlet Meduza. 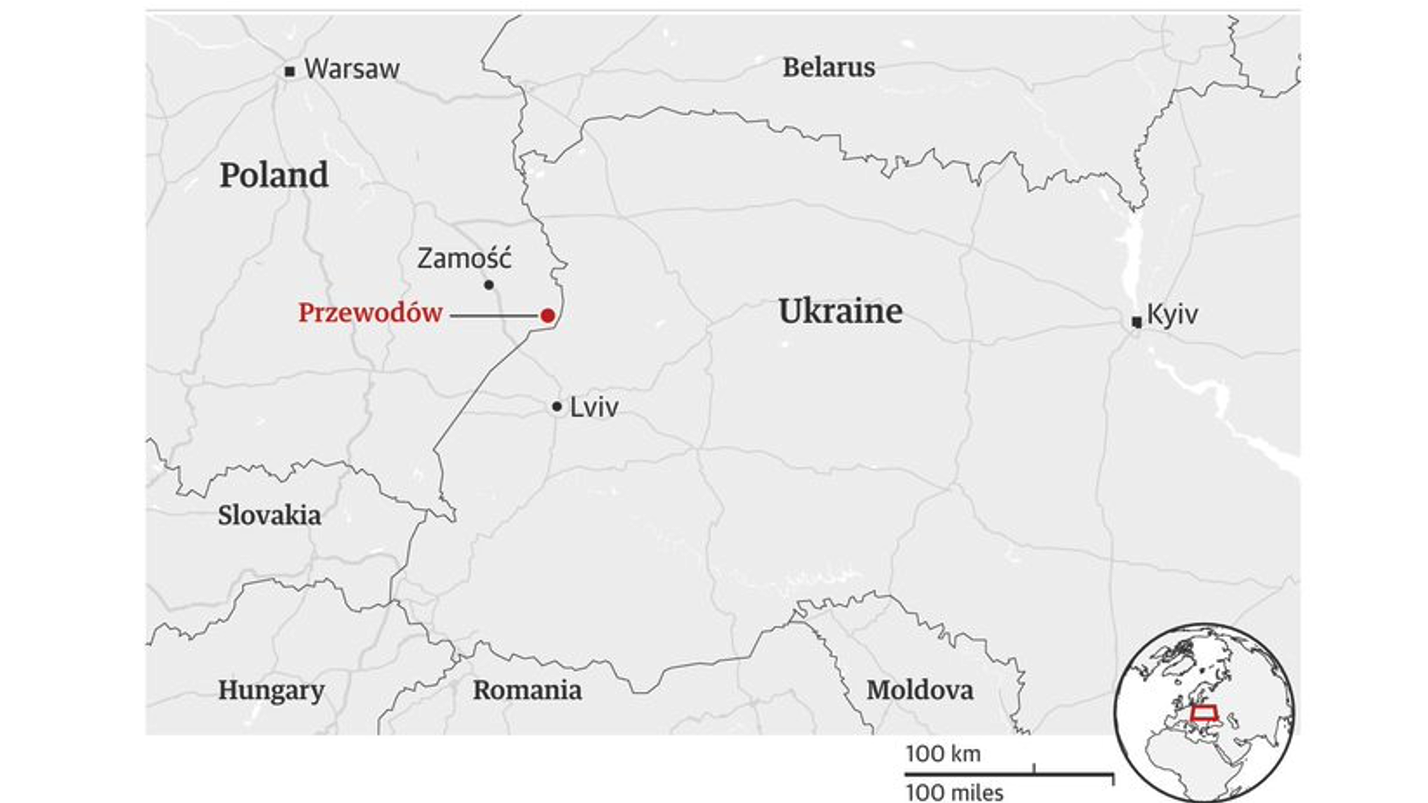 Ukrainian President Volodymyr Zelenskiy had confirmed that Russian missiles had struck Poland and said Ukraine had long warned that Russian actions would not be limited to Ukraine.

The missile strikes on Nato territory represented a “significant escalation,” Zelenskiy said and called for “action” in response.

Zelenskiy’s leading advisor Mykhailo Podolyak, who accurately predicted the start of war with Russia two years ahead of time, suggested the Russian missile strikes on Poland were intentional: "Strikes on Poland’s territory – not an accident, but a deliberately planned 'hello' from Russia, disguised as a 'mistake',” he said on Twitter.

The Kremlin was quick to deny it was responsible for the missiles. Russia's Defence Ministry issued a brief statement saying “no strikes have been carried out by Russian weapons against targets near the Ukrainian-Polish border.”

The military added that the statements about the fallen Russian missiles on the territory of Poland were a provocation to escalate the situation.

"Statements by the Polish media and officials about the alleged falling of 'Russian' missiles in the area of ​​​​the settlement of Przewoduv is a deliberate provocation in order to escalate the situation," the ministry said, reported Interfax.

"The fragments published in hot pursuit by the Polish media from the scene in the village of Przewoduv have nothing to do with Russian weapons," the Russian Defence Ministry said.

The reaction on Russian social media was immediate and extreme. Many Russians floated the idea that the missile attack was actually carried out by Ukraine as a false flag operation designed to make Poland invoke Nato’s Article 5 and bring Nato into the Ukraine war.

Some Russian Telegram channels immediately began pushing the conspiracy that the missile strike in Poland was actually a British provocation. The Kremlin recently accused the UK of blowing up two Nord Stream pipelines at the end of September, a claim hotly denied by Whitehall.

For her part, the head of RT and leading Kremlin propagandist Margarita Simonyan trolled Poland by commenting “its borders can’t be very well defended”.

The mainstay of Russian propaganda has been that Russia is fighting not just a “special military operation” in Ukraine, but is actually responding to an attack by Nato and that Russia is currently in a proxy war with the US and its allies – a very widely held view amongst ordinary Russians.

More serious commentators said that Poland was unlikely to invoke the clause – which has only ever been invoked once, by the US during the 9/11 attacks – and Warsaw would probably respond with a more measured retaliation.

But not all Russians are buying that. Russian Telegram channels following the action in Ukraine have become increasingly critical of the government’s “special military operation” and have been accurately reporting Russia’s various setbacks, including Ukraine’s highly successful Kharkiv offensive in September and the more recent withdrawal of Russian troops from Kherson last weekend.

The popular pro-war Russian Telegram channel Rybar refused to rule out that it was a Russian missile that landed in Poland.

Rybar admitted that the missile could be a Kalibr or Kh-101 and predicted that Poland could theoretically invoke Article 5 but would likely choose a less extreme course of action.

Rybar claims that if the missile proved to be Ukrainian, the situation would be hushed up like when a Romanian MiG-21 shot down a Ukrainian S-300 in March.

Slovakia's Defence Minister Jaroslav Nad was quick to accuse Russia of firing missiles on Poland: "Very concerned by Russian missiles dropping in Poland. Russia must explain what happened," he said in a tweet.

The Baltic states were also fast to rally to Poland’s side. They have been amongst Russia’s harshest critics since the 2014 annexation of Crimea.

Estonia's Foreign Ministry called the news from Poland "most concerning" and said that Tallinn would consult with Warsaw and other Nato allies.

The words of Latvia's Defence Minister Artis Pabriks were somewhat more restrained than most of the commentary being thrown around on social media shortly after the attack. He anticipated Poland invoking the less well-known Article 4.

Lithuania also expressed solidarity with Poland over the missile strikes, but unlike Slovakia and Latvia, it did not explicitly blame Russian aggression. Earlier in the evening Estonia made a statement calling for “unity” amongst Nato members in light of the developments.

"Today's massive missile attacks by the Russian Army on Ukraine clearly show that Russia wants to further terrorise its people and destroy the country," added Czech Prime Minister Petr Fiala on Twitter. "If Poland confirms that the missiles also hit its territory, this will be a further escalation by Russia," he added.

On the night of November 15, Russia rained down more than 100 missiles on Ukraine, targeting energy infrastructure all over the country in the biggest missile attack of the war.

However, other countries were affected. Reports from Moldova said the power was out across the country as Moldova’s grid is integrated and dependent on that of Ukraine.

“During Russia's October 10 nationwide strikes on Ukraine, missiles violated Moldova's sovereignty,” Samuel Ramani, an international relations expert at Oxford University, said in a tweet. “Now, they might have done the same to a Nato country Poland. Russia's aggression against Ukraine threatens European security, not just Ukraine.”

Hungary’s national oil and gas company MOL reported, meanwhile, that oil deliveries from Russia via Ukraine’s Druzhba pipeline had been halted because of damage caused by the missile onslaught, although oil pipeline flows from Russia to Poland had not been affected.

“The most likely outcomes of Russia's alleged missile strike on Poland,” Ramani said in a tweet. “More Western support for Ukraine's energy infrastructure and more air defence systems for Ukraine. In other words, another defeat for Russia.”

US President Joe Biden left the G20 summit early the same day, reportedly suffering from a “serious health issue”, but found time to request an additional $37.7bn in aid for Ukraine, the White House announced. Biden previously increased aid to Ukraine four-fold to $40bn, making the US Ukraine’s biggest donor.