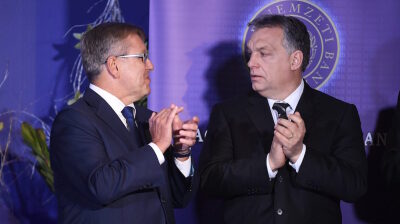 The EUR/HUF exchange rate briefly hit the psychological 400 level on March 7, a historical record. The market sell-off was fast and intense after the interbank market opened. At 8am one euro bought 388 and by 10am it lost 12 units or a 3% decline.

The dollar gained 3.5% at one point, with the USD/HUF bursting from 353 to a record 367 in a matter of hours. The Hungarian currency pared losses in the afternoon, crawling back 1%, but investors remain edgy and volatility remains high, analysts said.

Analysts believe the National Bank (MNB) intervened in the market but as in previous cases, it does not communicate openly about its moves, unlike its Polish or Czech peers. Further steps could follow, such as making short positions more costly for investors. Raising the base rate or the one-week deposit rate could be on the table, but it will only have a slight impact if the sell-off continues. The market remains news-driven, and a possible de-escalation of the conflict could reverse the falling trend.

MNB governor Gyorgy Matolcsy held talks with Prime Minister Viktor Orban on Monday night. The government is drawing up an action plan to preserve the stability of the economy and the exchange rate, Hungary’s leading financial news site Portfolio.hu writes

The forint was one of the best-performing currencies before the war, but since then it has shed 12-13% of its value. While the Czech koruna and Polish zloty have also suffered from the capital outflow, the forint has recorded the steepest decline.

Besides Hungary’s proximity to the conflict zone, analysts say the country’s dependence on Russian energy and the possibility of extending sanctions to the energy sector spurred the market sell-off. Some speculate that the government’s political double game between Moscow and Brussels could have also played a role in the sharp decline in the forint’s value.

Just as the local currency was heading to its all-time low, Finance Minister Mihaly Varga on Facebook boasted about the success of the government’s economic policy during the pandemic.

In 2020 and 2021 total spending (by MNB and the government) on crisis management was 36% of  GDP, compared to -1.6% during 2008-2009 under the socialist-liberal government. A few hours later, Varga said that the forint has become the victim of EU sanctions.

"The biggest threat to the forint and the Hungarian people is the floating of the extension of sanctions to the energy sector," he said.

In his latest opinion piece, Matolcsy did not even mention the slide of the currency. Instead, he also recalled the concentrated efforts by the MNB and the government to manage the crisis after the pandemic.

The global market rout on Monday came after US proposals to ban Russian oil exports. EU leaders are also weighting hitting Russia with new sanctions and the possibility of imposing a ban on gas and oil.

Hungary will veto all energy-related sanctions, which would lead to an energy crisis, government officials said. Keeping retail energy prices low is a key issue in Viktor Orban’s re-election campaign. Hungarian households pay the lowest gas and electricity prices in Europe after Bulgaria in nominal terms, but when adjusted to purchasing power, it is in mid-ranking.

With less than a month to go until the crucial parliamentary elections, the weak forint is politically bad news for Orban seeking a fourth consecutive term, while it gives ammunition to the opposition to blast the government’s economic policies.