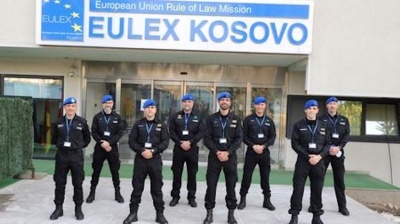 The EU Rule of Law Mission in Kosovo (pictured) confirmed an attack on its car patrol late on December 10. / EULEX
By bne IntelliNews December 11, 2022

An EU Rule of Law Mission (EULEX) car patrol was attacked with a stun grenade in northern Kosovo late on December 10.

The attack took place after earlier in the day Kosovo's President Vjosa Osmani announced that extraordinary local elections in four municipalities in northern Kosovo, populated mainly by ethnic Serbs, have been postponed until next spring due to the worsening security situation. The move was intended to avert the latest security crisis in the region.

The attack was confirmed by the EULEX mission in a statement on December 11.

“We confirm that a stun grenade was thrown at an EULEX reconnaissance patrol last night (10/12) near Rudare. No EULEX Formed Police Unit officer was injured, and no material damage was caused,” the statement said.

“This attack, as well as the attacks on Kosovo Police officers, are unacceptable. We strongly condemn the violent acts perpetrated by armed persons in northern Kosovo, including against the international community.”

"#EU will not tolerate attacks on @EULEXKosovo or use of violent, criminal acts in the north. Barricades must be removed immediately by groups of Kosovo Serbs. Calm must be restored. EULEX will continue to coordinate w/Kosovo authorities & KFOR,” wrote Borrell on Twitter.

“All actors must avoid escalation,” he added.

Tensions increased in northern Kosovo ahead of elections initially scheduled for December 18 to fill vacant posts after Serbs in northern Kosovo decided to abandon the state institutions in protest against the authorities’ insistence on continuing with re-registration of cars with Serbian number plates.

On Saturday, Kosovo Serbs erected blockades at the border with Serbia due to the arrest of Dejan Pantic, a former member of the Kosovo police, who resigned in November as part of the mass withdrawal from state institutions.

Kosovan police claimed that criminal groups shot on three occasions from Gazivode at the police units during the evening of December 10. Police said they returned the fire in self-defense.

They suspect that Pantic participated in the incident of December 6, when the premises of the Central Election Commission in North Mitrovica and Zubin Potok were demolished.

The situation now risks boiling over following the overnight exchange of gunfire between Serbs in northern Kosovo and the police, and the attack on the EULEX patrol.

The Jarinje and Brnjak crossing points in the north of Kosovo are still blocked by the barricades and are not possible to cross them on foot or by car. Serbia’s President Aleksandar Vucic convened a meeting of the National Security Council at 7 p.m., claiming that Kosovan Prime Minister Albin Kurti has threatened to attack the Serbs at the barricades during the evening, RTS reported citing Serb officials from Kosovo’s north.

Head of the Serbian List party, Goran Rakic, announced that he has information that Kurti will send special units to the north of Kosovo.

“This is the moment when the responsibility is on Kfor and EULEX, to prevent the chaos that Kurti is preparing," said Rakic.

RTS reported that according to its information a special unit of the Kosovan police, with armoured vehicles, entered the building of the large dam on the Lake Gazivode and removed the Serbian flag.

However, the Directorate of Police in Pristina denied this, saying that its special units did not detain and mistreat Serbian citizens employed at Lake Gazivode and that they did not occupy the facility at that location.

After consultations with political parties, Osmani set April 23, 2023, as the new date for holding extraordinary elections for mayors in Mitrovica North, Zubin Potok, Leposaviq and Zvecan and for the municipal assemblies of Zvecan and Leposaviq.

“President Osmani announced that there was a complete consensus among political parties for postponing the elections in the country’s north and that the evaluation of the competent institutions regarding the security situation there was also considered,” the presidential cabinet said.

US ambassador to Kosovo Jeffrey Hovenier also warned on December 7 that conditions are not in place for extraordinary local elections to be held safely in ethnically divided northern Kosovo.

One day after the postponement, Kosovo's Central Election Commission held a meeting to discuss the next steps.

In the meantime, Vucic said late on December 10 that Serbia will send a note to Kfor in Kosovo with a request for the return of Serbian security forces to Kosovo.

A few days ago, Serbian officials said that Serbia may send up to 1,000 members of its security forces back to northern Kosovo after Kosovo’s police entered North Mitrovica, which is considered by Belgrade to be an illegal move.

The director of the Serbian office for Kosovo, Petar Petkovic, claimed that about 300-350 Kosovan policemen, including members of the Regional Operational Support Unit (ROSU), with armoured vehicles, entered North Mitrovica alarming the Serb population.

In his address to the public regarding the situation in Kosovo, Vucic said that the text of the request has been agreed on with government officials and the decision will be officially taken on December 12 or 13 in line with the UN Security Council resolution 1244.

However Vucic said that he knows that the Nato-led peacekeeping mission, Kfor, will reject this request.

“The legal language is very precise, so then we will see the next steps, but it's good, so that one day they don't tell us that we never asked for it,” Vucic underlined.

Vucic claimed Serbia has “shown every desire for a compromise”, but Pristina has “done everything to make it impossible for Serbs in Kosovo to live normally”.

Vucic argued that Kosovo’s plan to officially submit an application for EU membership is in violation of the 2020 Washington agreement.

Belgrade does not plan to recognise Kosovo, part of Serbia until it declared independence in 2008, or give up on the demand for the formation of the Community of Serbian Municipalities, SZO.