EU tries to pressurise Putin into prisoner swap for Sentsov 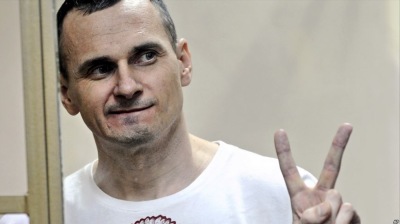 The European Parliament is ramping up the pressure on Russian President Vladimir Putin to arrange a prisoner swap for Oleg Sentsov following the Ukrainian film director’s award of the prestigious 2018 Sakharov Prize for human rights.

Sentsov, who is currently an inmate in a penal colony in Siberia serving a 20-year term, was not there in person to collect his award in Strasbourg on December 12. The prize, consisting of a certificate and €50,000, was received on his behalf by his lawyer Dmitriy Dinze and his cousin at a ceremony in the European Parliament during the plenary session,

Presenting the award, the Parliament's President Antonio Tajani called for the immediate and unconditional release of Sentsov and all other illegally detained Ukrainian citizens in Russia and the Crimean Peninsula.

“Oleg Sentsov was nominated for his peaceful protest against the illegal occupation of his native Crimea; also for his courage, determination and his convictions in support of human dignity, democracy, the rule of law and human rights,” he said. “These are the values on which our European Union is built, even more so after the terrible attack yesterday; values that this Parliament cherishes, upholds and promotes".

In comments to bne IntelliNews, Kaplan insisted that her cousin’s potential release had not been complicated by the case of Nadiya Savchenko, the Ukrainian helicopter pilot who was part of a prisoner swap in 2016 and has since been accused of plotting a coup against the Kyiv government.

“Nadezhda [Nadiya] Savchenko was illegally imprisoned by the Russian administration and she needed to be released,” said Kaplan. “Regardless of her political opinions, she had to be freed. I am focusing on Oleg’s case so I am not closely following the accusations against Savchenko.”

However, Christophe Deloire, secretary-general of the Paris-based Reporters Without Borders, admitted the controversial Savcheno may have complicated future prisoner swaps.

“It’s tragic the impact that Russian prisons has had on her mindset,” Deloire told bne IntelliNews. “But her imprisonment wouldn’t have happened without Russian aggression in the first place.”

MEP Michael Gahler, the Rapporteur on Ukraine, said another problem with any possible prisoner exchanges is the fact that the Kremlin doesn’t recognise its own soldiers who have been captured in the Donbass region.

“The Ukrainians have captured 20 Russian soldiers but the perfidious habit of the Kremlin is not to consider them as their own soldiers,” he said.

The awarding of the Sakharov prize to Sentsov has gone down like a lead balloon in Russia with even the opposition journalist Oleg Kashin criticising the director in an interview on state-controlled Perviy Kanal.

Sentsov's work on his film Rhino, about children of the 1990s, was interrupted in 2013, when he joined the Euromaidan revolution that erupted in Ukraine after pro-Russia President Viktor Yanukovich decided to suspend talks on an EU-Ukraine Association Agreement.

In February 2014, the protests paved the way for a new pro-European government and the ousting of Yanukovich. When Moscow responded by illegally annexing Crimea and launching a hybrid war against Ukraine, Sentsov helped bring food to Ukrainian soldiers and organised rallies for a united Ukraine in Simferopol.

Sentsov was arrested by the Russian Federal Security Service in Crimea in May 2014, and deported to Russia. In what Amnesty International called a "cynical show trial", a Russian military court in August 2015 convicted Sentsov to 20 years imprisonment for plotting terrorist acts. Sentsov denies the charges, which he and human rights groups call politically motivated.

Sentsov said he was beaten for 24 hours in an attempt to force him to confess. Russian authorities have refused to investigate the allegations of torture.

In May this year, he began a hunger strike, demanding the release of all Ukrainians held on political ground in Russia and annexed Crimea. Sentsov ended the 145-day hunger strike on 6 October 2018. In a handwritten statement, he explained that he had no choice but to halt the hunger strike to avoid being force-fed by Russian authorities due to the critical state of his health.

Ukraine’s calls to swap Sentsov and Ukrainian journalist Roman Suschenko, arrested in Moscow in 2016 on espionage charges, for Russian prisoners, have so far been rejected by Moscow.

Other laureates in the history of the prize have also been prevented from attending because of detention, most recently Raif Badawi in 2015. Sentsov is the first laureate from eastern Europe since 2009, when the Russian human rights centre, Memorial, received the prize.

Thirty years since it was first awarded, Gahler said the award also draws attention to the struggle of all Ukrainian political prisoners currently behind bars in Russia and the annexed Crimean peninsula.

Created through a Parliamentary resolution in December 1985, the prize bears the name of prominent Soviet-era dissident, Andrei Sakharov, joint inventor of the Soviet hydrogen bomb, 1975 Nobel Peace Prize-winner and campaigner for human rights and nuclear disarmament in the Soviet Union.

The prize was named after him in recognition his courageous defence of human rights, among which the freedom of thought and expression, to the detriment of his professional career and personal freedom.

The prize was awarded for the first time in 1988 jointly to Nelson Mandela and posthumously to Soviet dissident Anatoli Marchenko, who died in 1986 after a three-month-long hunger strike for the release of all Soviet dissidents. The public outcry caused by his death pushed the USSR’s last President Mikhail Gorbachev to authorise the release of political prisoners from Soviet jails.

Sentsov’s lawyer Dinze told journalists in Strasbourg that his client’s health had improved somewhat lately although the director hadn’t expressed much emotion about winning the prize.

“He is about to be released from hospital and he looks a bit better, his cheeks look at bit rosier and he become a bit more animated when he is talking about his case or about his new film,” said Dinze.

“Sentsov is a very quiet person,” he added. “He rarely shows his emotions and he is trying to contain them after these years in incarceration. He says we shouldn’t forget the other people unfairly locked up. Of course, he’s pleased to win the prize but he hopes it will ultimately influence the Russians and trigger a prisoner swap.”