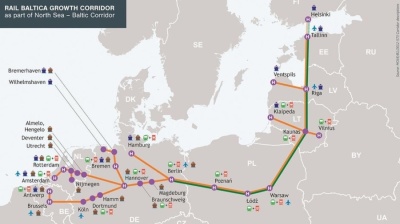 The EU announced on July 16 it is supporting the economic recovery in all member states by injecting almost €2.2bn into 140 key transport projects, including €183.8mn into the Baltics’ two premier Rail Baltic railway projects.

According to Commissioner for Transport Adina Valean, the €2.2bn EU contribution to this crucial transport infrastructure will help kick-start the recovery and that the EU expects to generate as much as €5bn in investments.

“The type of projects we invest in ranges from inland waterways transport to multimodal connections, alternative fuels to massive railroad infrastructure. The Connecting Europe Facility (CEF) is one of our key instruments in creating a crisis-proof and resilient transport system — vital now and in the long run," Valean said in a press release.

The EU will support rail infrastructure projects located on the trans-European transport (TEN-T) core network with a total of €1.6bn in the framework of 55 projects. This includes the Rail Baltic project, which integrates the Baltic states in the European rail network, as well as the cross-border section of the railway line between Dresden in Germany and Prague in the Czech Republic.

The EU will also support the shift to greener fuels for transport, in the framework of 19 projects, with almost €142mn. A number of projects involve converting vessels so they may run on liquefied natural gas (LNG), as well as installing corresponding infrastructure in ports.

Nine projects will contribute to an interoperable railway system in the EU and the seamless operation of trains across the continent through the European Rail Traffic Management System (ERTMS). Upgrading locomotives and railway track to the unified European train control system will boost safety, decrease travel times and optimise track usage. The nine projects will receive over €49.8mn.

The projects were selected for funding via two competitive calls for proposals launched in October 2019 and November 2019.

Overall, under the CEF program, €23.2bn is available for grants from the EU's 2014-2020 budget to co-fund Trans-European Transport Network (TEN-T) projects in EU member states. Since 2014, the first CEF programming year, six calls for project proposals have been launched, one per year. In total, CEF has so far supported 794 projects in the transport sector, worth a total of €21.1bn.

For both calls, given EU member states' approval of the selected projects, the Commission will adopt formal financing decisions in the coming days. The Commission's Innovation and Networks Executive Agency (INEA) will sign the grant agreements with the project beneficiaries at the latest by January 2021.

As part of the preparation for the launch of Rail Baltica, the Baltics’ premier railway project, an arm of Lietuvos Gelezinkeliai (Lithuanian Railways, LG), Lithuania’s national railways, said on July 14 it has kickstarted market consultations aimed at renewing its train fleet for over €200mn.

Lithuanian media have mentioned 35 new trains, but the exact number will be decided after the consultations. Some of the trains should be electric and others should be diesel or hybrid.

The decision on the train renewal follows the national railway’s excellent performance last year, when Lithuanian Railways made €57.2mn in net profits, 4.4% up from 2018.

Until 2030, LG plans to invest €5.5bn to modernise and develop the country’s railway infrastructure network, with Rail Baltica benefiting from the largest investment.

“The major part of these investments will consist of the laying down of Rail Baltica. However, this project is not the only one in our plans. The public procurement of electrification, the value of which is more than €2.5mn, has gathered speed,” Mantas Bartuska, the general manager of Lithuanian Railways, has said.

On July 14, Lithuanian Prime Minister Saulius Skvernelis met Valean and told her that the construction of the main line of Rail Baltica is progressing quickly and reaffirmed his country's commitment to complete the project by 2026.

The Rail Baltica section linking the city of Kaunas to Kaunas Intermodal Terminal is scheduled to be completed next November, the prime minister said.

Last month, Lithuania invited bids from potential contractors to build a section of almost 100 kilometres from the Kaunas terminal northward to the Latvian border, with construction expected to begin in 2021. The total value of the project is €475mn.

The overall length of the railway will be 870 kilometres, including 392 kilometres in Lithuania, 265 in Latvia and 213 in Estonia. The line is scheduled to be completed by 2026.