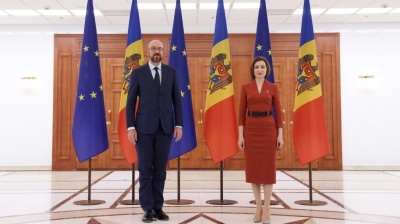 The EU will provide economic and political assistance to Moldova, open up the European energy procurement platform and provide the army with additional equipment, President of the European Council Charles Michel announced on May 4.

The assistance does not relate to lethal weapons and Moldova benefits from this support through the European Instrument for Peace, Moldova’s Ministry of Defence explained in a note.

The EU is stepping up its support for Moldova, which is seen as highly vulnerable to spillovers from the war in neighbouring Ukraine. A series of unexplained explosions in the Russia-backed separatist republic of Transnistria raised fears of an effort to destabilise the country.

There are also divisions within Moldova proper that is under Chisinau’s control. While the government and President Maia Sandu are seeking EU candidate status for Moldova, the opposition Socialists and Communists want Moldova to be closer to Russia.

The two parties have proposed a draft bill aimed at “strengthening the neutrality of the country” that would "ban the deployment of foreign troops and weapons on the territory of the Republic of Moldova, except for those belonging to the Russian Federation”.

The project would legalise the presence of the Russian troops in the separatist Transnistria region but also allow more troops to be deployed including in other parts of the country. Moldova’s authorities have constantly insisted over the past decades on the withdrawal of Russian troops with no mandate (GOTR) and for the replacement of the so-called peacekeeping Russian troops operating under a (controversial) mandate with international peacekeeping forces.

Michel announced at a press conference in Chisinau on May 4 that the European Union is obliged to help Chisinau and increase its support for the stability, security, territorial integrity and sovereignty.

"This is a defining moment for the Republic of Moldova and for Europe… Moldova has been affected by provocative incidents and attacks. Moldova has received a huge number of refugees. Our economic and political support will continue. Our energy procurement platform will be open to Moldova,” said Michel.

Commenting on the assistance, the Moldovan defence ministry said in a note: ”In the field of defence, the Republic of Moldova benefits from assistance from the European Union through the European Peace Facility. The assistance is not aimed at and does not refer to lethal weapons.”

At the same time, the ministry stated that "the activities included in 2021 the consolidation of the medical capacities of the National Army and the increase of the capacities of the Moldovan military engineers with a support amounting to €7mn".

According to the Moldovan authorities, in the coming period, six areas of interest were identified for cooperation: military logistics, mobility, command and control, cyber defence, situation monitoring capabilities and tactical communications.

"The Republic of Moldova and the European Union continue to cooperate in order to increase resilience and modernise the defence sector," the ministry concluded.

Meanwhile, the opposition Socialist Party (PSRM), backed by its ally the Communist Party, presented their controversial initiative to the Russian ambassador to Chisinau Oleg Vasnetov, as reported by Tass.

The two opposition parties are far from holding a majority in parliament and the purpose of the initiative seems to be rather creating social tensions, undermining the state’s stability and possibly providing Russia with arguments for intervention if needed.

Despite the report from the meeting with Vasnetov, it remains unclear who informed whom about the legislative initiative and it is possible that Vasnetov handed the draft law to the Socialists.

"The interlocutors discussed the problems of trade and economic relations and other issues of Moldovan-Russian relations. At the same time, the leadership of the PSRM confirmed the need for legislative strengthening of the constitutional neutrality of the Republic of Moldova and preventing our country from being drawn into any conflicts," the PSRM message, quoted by Tass.ro, reads.

In March, the Socialist Party proposed in parliament to limit the republic's cooperation with Nato and other military interactions by adopting a law on neutrality, the Russian news agency noted.

The bill refers to the rejection of any form of cooperation with military blocs, preventing the deployment of foreign military bases, training, research and other military and dual-use centres in the country.

Moldova has carried out military drills with Nato since 1994 under the framework of an individual partnership plan not aimed to develop into membership, and in line with the country’s neutrality statute included in the constitution.

Sandu recently stated that the country needs to spend more in order to develop a proper army.