EU to hit Russia with a 'massive package' of sanctions 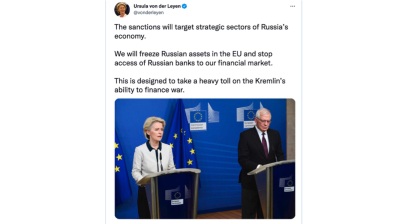 "This is designed to take a heavy toll on the Kremlin’s ability to finance war,” von der Leyen said in a tweet. / wiki
By bne IntelliNews February 24, 2022

EU Commission President Ursula von der Leyen said Europe will hit Russia with a “massive package” of sanctions following its attack on Ukraine on February 24, which will “undermine Russia’s economic base”.

“The sanctions will target strategic sectors of Russia’s economy. We will freeze Russian assets in the EU and stop access of Russian banks to our financial market. This is designed to take a heavy toll on the Kremlin’s ability to finance war,” von der Leyen said in a tweet.

The West has already threatened very harsh sanctions against Russia should it attack Ukraine – sanctions that will now be triggered by the multi-front attacks on Ukraine by Russia’s military that started in the early hours of February 24.

The EU will be freezing Russia's assets, halting its banks' access to European financial markets and targeting "Kremlin interests" over its "barbaric attack" on Ukraine, senior officials told Reuters.

"President Putin is responsible for bringing war back to Europe," von der Leyen said, adding that the EU would hold him accountable.

An emergency summit starting at 7pm GMT will also discuss offering EU candidate status to Ukraine, Lithuania's President Gitanas Nauseda said, although it may not win approval from all EU leaders.

Washington has yet to respond, as the assault started in the middle of the night for the US, it is certain to follow the EU’s lead and has also promised extremely harsh sanctions to follow on from the “first tranche” of sanctions that were imposed earlier this week after Russian President Vladimir Putin recognised the breakaway republics of Donetsk and Luhansk on February 21.

Germany has already in effect blocked the start of operations of the controversial Nord Stream 2 gas pipeline, which is designed to circumvent Ukraine and enable Russia to supply Germany directly with Russian gas.

The sanctions on Russia will be painful, but as bne IntelliNews discussed with Elina Ribakova, deputy chief economist with the Institute of International Finance (IIF), in a recent podcast, the West's ability to hobble the Russian economy with sanctions is limited after Putin spent over a decade sanction-proofing the Russian economy by building his “fiscal fortress”.

The US and EU have been in extensive talks in the last months to co-ordinate their sanction efforts and have already worked out an extensive package. In addition, the US has prepared a “sanctions from hell” bill that details many of the measures that Washington intends to impose.

Those US sanctions include hitting a list of top 13 Russian banks, including the two state-owned giants VTB and Sber (formerly known as Sberbank).

The US bill also includes a sweeping clause that allows US President Joe Biden to target entire industries, highlighting the extraction industries that are Russia’s main hard currency earners.

However, banning trade in Russian oil, gas and minerals is probably off the table, as these industries are deeply integrated with the global economy and any sanction pain put on them will boomerang back on the West and cause chaos on the international commodity markets.

Likewise, while the US has pushed for banning Russia from the SWIFT payment service that underpins international financial transactions, the EU has rejected the idea, as it would make it impossible for countries like Germany to pay for their Russian gas imports and could destabilise the European financial sector.