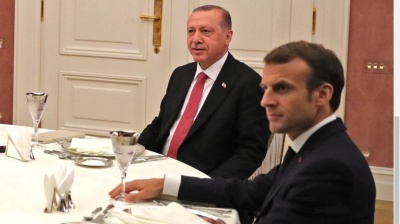 Erdogan (l) and Macron are at loggerheads over issues including Islam, the Nagorno-Karabakh, Libya and Syria conflicts and Turkey's gas exploration in contested waters of the Mediterranean.
By bne IntelIiNews October 26, 2020

Turkish President Recep Tayyip Erdogan on October 26 deepened the rift between Turkey and France and further imperilled Ankara’s relations with the European Union when he called on Turks to boycott French goods.

The row has blown up over France's tougher stance in defending secularism from radical Islam since in mid-October outside Paris a history-geography teacher was beheaded after showing Prophet Muhammad cartoons during a class about freedom of speech. Macron and Erdogan have for months been in a war of words over Turkey’s aggressive policies when it comes to the conflicts in Libya, Syria and Nagorno-Karabakh and Turkish exploration for gas in waters claimed by Greece and Cyprus. There is, meanwhile, a continuing debate among analysts as to what extent Erdogan is using aggressive foreign policy to distract the Turkish electorate from Turkey’s huge economic problems, with many Turks feeling their president botched the economic management of their country long before the advent of the coronavirus (COVID-19) pandemic. The problem with Erdogan’s efforts to stridently represent Turkey as a growing regional power is that he does not have the economic ammunition; the strategy risks undermining Turkey’s economy further, thus making it less and less an economic power that can hold its own.

In a televised speech, Erdogan urged world leaders to protect Muslims "if there is oppression against Muslims in France". He added that Muslims were now "subjected to a lynch campaign similar to that against Jews in Europe before World War II", and said that "European leaders should tell the French president to stop his hate campaign".

Over the weekend, Erdogan said Macron needed a mental health check for speaking out so forcefully on Islam. Those comments prompted Paris to recall its ambassador to Ankara for consultations.

Macron, who also sparked anger among Muslims by saying after the brutal murdering of the teacher that Islam is “a religion that is in crisis all over the world today”, tweeted in French, English and Arabic: “Our history is one of a battle against tyranny and fanatacisms. We will continue. We respect all differences in a spirit of peace. We will never accept hate speech and we defend reasonable debate. We will continue. We hold ourselves always on the side of human dignity and universal values.”

Erdogan’s attack on Macron got backing from close ally Pakistan, with the country’s prime minister, Imran Khan, saying Macron“attacked Islam” by encouraging the display of cartoons depicting the Prophet Mohammad. Islam was being associated with terrorism, protested Khan. Pakistani Foreign Minister Shah Mehmood Qureshi said the French ambassador in Islamabad was summoned to be given a diplomatic protest against Macron’s “irresponsible remarks”.

In his response to the controversy, Iranian Foreign Minister Mohammad Javad Zarif tweeted strong words, but notably refrained from addressing Macron specifically and did not call for a boycott of French goods.

Insulting Muslims was an “opportunistic” abuse of free speech, wrote Zarif, adding: “Muslims are the primary victims of the ‘cult of hatred’.”

“Insulting 1.9B Muslims—& their sanctities—for the abhorrent crimes of such extremists is an opportunistic abuse of freedom of speech. It only fuels extremism,” he also said.

In Qatar, Turkey’s only Gulf ally, some food distribution groups announced they were removing French products from their shops for the foreseeable future. A French cultural week planned at the Qatar University was postponed with officials protesting at the “deliberate attack on Islam and its symbols”.

In Kuwait, French cheeses were removed from some stores and 430 Kuwaiti travel agents reportedly suspended reservations for flights to France.

There was no response to Erdogan's call for a boycott of French goods from another Middle East heavyweight, Saudi Arabia, which has severely strained relations with Erdogan and Turkey.

In Turkey, leader of the recently founded opposition party DEVA and former Erdogan ally and economy czar, Ali Babacan, said Erdogan’s call to boycott French goods was “childish” and “propaganda”, adding: “I guess it will occupy the agenda for 48 hours and then everyone will forget it.”

“There is a menu that remains in the hand and whenever the agenda gets weaker, they [the Erdogan administration] look at that menu immediately, and they come up with the motto ‘Let this be the current agenda’”, he added.

French Trade Minister Franck Riester said France was not planning a reciprocal boycott against Turkish products and would continue talks and relations with Turkey and its president. “There is no retaliation on the agenda,” Riester told RTL radio. He nevertheless reiterated the government’s condemnation of Erdogan’s recent comments about Macron and his treatment of Muslims in France.

Bloomberg reported that France’s Medef business lobby was urging French companies to remain stoical in the face of boycotts of their products in some Middle Eastern countries.

Medef head Geoffroy Roux de Bezieux reportedly said that French principles of secularism and freedom of speech must take precedence over companies’ development plans. “Of course this is bad news,” he said during an interview with RMC radio, referring to the boycotts. But he rejected calls to boycott Middle Eastern products, remarking: “Don’t answer stupidity with stupidity.”

Iran calls on Saudis to limit $67bn defence spending to Tehran’s $10bn
Azerbaijan’s Aliyev calls on Armenia, Russia, Turkey and Iran to assist in creating Nakhchivan land corridor
Brighter days ahead: The economic bounce back in 2021