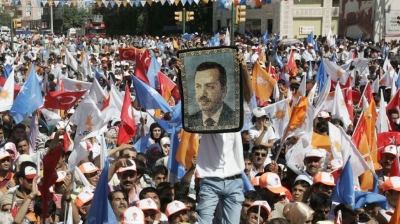 Will the move be a polarising crowd pleaser ahead of the local elections?
By bne IntelliNews February 5, 2019

Turkish President Recep Tayyip Erdogan on February 5 returned to his line that the Treasury must, and will, take over a 28% stake in Isbank, Turkey’s largest listed lender, from the main opposition Republican People’s Party (CHP).

Erdogan’s advisers have for several years been floating the idea of nationalising the stake—bequeathed to the CHP by Mustafa Kemal Ataturk, founder of the Turkish Republic—but the markets took this latest statement from Turkey’s strongman seriously. Shares in Isbank fell by more than 6% after Erdogan made his remarks to reporters about the lender following a parliamentary speech to lawmakers of his Justice and Development Party (AKP). The issue has reared its head again as campaigning hots up ahead of the March 31 local elections, in which the AKP will battle to hold on to traditional strongholds amid Turkey’s ongoing economic turmoil.

“Political parties do not have the right or authority to take part in banking activities,” Reuters reported Erdogan as saying. “I believe this parliament will take this historic decision, with God’s permission, and the 28% Isbank stake will be transferred to the nation’s treasury,” Erdogan reportedly told the lawmakers.

Erdogan said the timing of the transfer to the Treasury would depend on how long the parliamentary process takes.

CHP takes no dividends
The CHP appoints four members to Isbank’s board.

In opposing the standpoint of Erdogan, the CHP points out that its members on the Isbank board and the party do not get a dividend payout from the bank.

Isbank has said in the past that any effort to nationalise it would amount to a financial crime.

Banks struggle with restructuring demands
Turkey’s financial sector is beset by mounting bad debts and the likely onset of a recession. Turkish banks are struggling with debt restructuring demands from companies hammered by the lira’s 28% drop against the dollar last year. There is some evidence that government officials are pressuring the banks to help out the corporate sector, with analysts noting that doing so to an unwise degree just transfers the red ink from industry to the banking sector. The lira’s weak standing means companies, overloaded with foreign currency-denominated debt, cannot meet repayment demands.

"Inevitably financial markets will be nervous to this kind of ’interventionist’ news in the run up to the local elections at the end of March," Nigel Rendell, a London-based senior analyst at Medley Global Advisors told Bloomberg.

Erdogan is known for meddling in economic and financial matters the markets would prefer he left well alone. Before last year’s presidential vote, he pledged to take greater control of monetary policy. That helped trigger the painful currency crisis Turkey went through last year.