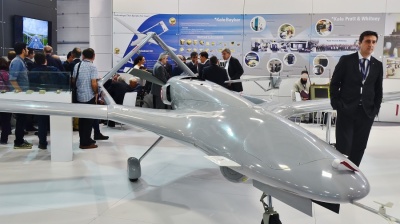 Turkey's Baykar is said to be expanding its production of Bayraktar TB2 armed drones to Ukraine, while saying it would not sell any of the UAVs to Russia. / CeeGee, cc-by-sa 4.0.
By bne IntelIiNews August 9, 2022

Turkish defence company Baykar, the producer of the Bayraktar TB2 attack drone, is already in the process of building a factory at an undisclosed location on Ukrainian territory to make the unmanned aerial vehicles (UAVs), Ukraine's ambassador to Turkey has said.

Baykar has established a company in Ukraine and the intended plant, previously rumoured to be under construction even before the start of the Russian invasion of its neighbour in late February, was in development, Newsweek quoted Vasyl Bodnar as saying, citing an interview given by the envoy to RBC Ukraine.

"The factory will be built. Just a week ago, the [Ukraine] government approved the bilateral agreement and sent it to the parliament for ratification, the agreement on the construction of the plant itself," the diplomat said.

Kremlin spokesman Dmitry Peskov was reported by Sputnik as saying that if the plant was built it would clearly be a military target for Russia, adding: “The very fact of creating such a facility, which, of course, will immediately fall under [the Russian aim for Ukrainian] demilitarisation—this must be understood—this will probably only prolong the suffering of Ukrainians, but will not help to avoid what is the goal of the special military operation." Russia continues to refer to its waging of war in Ukraine as a “special military operation”.

Although Turkey, within its complex ‘competitive cooperation’ relationship with Russia, attempts to maintain strong relations with both Moscow and Kyiv, Baykar appears to have ruled out any suggestion that it could treat the Russians equally by also selling attack drones to the Kremlin. August 9 also brought speculation that Turkish Kirpi 4x4 armoured vehicles may have been delivered lately to Ukraine. Like the Turkish drone supplies to the Ukrainians, the deliveries, if confirmed, could be an irritant for Moscow. Rumours continue to abound, on the other hand, that Iran will not live up to assurances given to Kyiv to not deliver surveillance and attack drones to Russia that could be used in the war in Ukraine.

According to Bodnar, Baykar purchased a plot of land in Ukraine for its intended drone plant. He added that Baykar was moving ahead in building the factory as "it was almost a personal commitment of the company owners to bring this production to Ukraine."

The decision to build the plant in Ukraine was not just political, it was "also practical since a significant part of the models that will be produced at this plant will have components of Ukrainian production," Bodnar added.

"It can be engines, other spare parts, wheels, many different things that are high-tech in our country and can be used for these aircraft," the ambassador said, adding that the field of defence technology was "one of the drivers" of the Turkey-Ukraine relationship.

"Despite the war, our companies continue to fulfil their obligations," he said, adding that the Turkish drones were "already a legend of our resistance.”