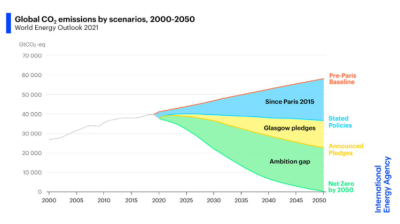 Turkey's ambitions may be among those that go up in smoke if Ecosphere's analysis is correct. / IEA.
By bne IntelIiNews October 18, 2021

Turkey would have to reduce its total greenhouse gas emissions by 80% to reach its declared target of net zero emissions by 2053, according to the Ekosfer Association (Ecosphere Association).

The country lately became the last G20 nation to ratify the Paris Climate Agreement. It set the target after the ratification.

Ekosfer said in a statement , as cited by bianet, that Turkey’s greenhouse gas emissions would have to be reduced from the current 506mn tonnes to around 100mn tonnes in the next 32 years to achieve the declared aim. The remaining 100mn tonnes would need to be absorbed by carbon sinks such as forests.

However, Turkey's current pledge under the Paris Agreement allows for the country's emissions to increase to as high as 929mn tonnes in 2030.

Ekosfer observed that Turkey has not made any declarations about a possible coal phase-out. It thus concluded that "there are doubts as to whether the target set for the year 2053 is real or not."

Ekosfer Association executive board member Ozgur Gurbuz was reported as saying that "as long as the increase in emissions continues, it will be harder to reduce them," adding: "We do not know based on what study or report the 2053 net zero target has been set."

Gurbuz was further quoted as saying: "If we are to take this target seriously, we need to schedule the coal phase-out, put an end to the policies of transportation based on highway and airway and transfer the resources spent for nuclear energy to renewable energy and energy efficiency without losing time." He warned that "otherwise, the 'net zero' target will turn into a 'net dream' target in a few years and be forgotten."

Turkey's carbon sink capacity was 84mn tonnes by the end of 2019, thus its net greenhouse gas emissions were 422mn tonnes, the association calculated.