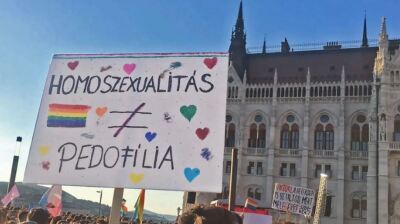 Demonstration against the government's anti-LGBT regulation in 2021 June. Critics said the law conflated sexual and gender diversity with paedophilia.
By bne IntelliNews July 18, 2022

The European Commission referred Hungary to the EU’s highest court (CJEU) over the controversial LGBT regulation and the media’s authority rejection of a bid by independent broadcaster Klubradio for its old frequency on July 15. In two other cases, an infringement procedure was launched. One for the discriminatory pricing of fuel and for introducing grain export restrictions, which may have breached EU rules.

The legislation singles out and targets content that "promotes or portrays" what it refers to as "divergence from self-identity corresponding to sex at birth, sex change or homosexuality" for individuals under 18.

Parliament approved the anti-paedophilia bill, which bans content portraying or promoting homosexuality, transmitting information about LGBT or sex reassignment to anyone under 18.

The nationalist ruling Fidesz party made homophobia a key campaign theme. A referendum was held on the same day as the election, which failed as fewer than 50% of eligible voters cast valid ballots.

Voters were asked whether they support: the ‘teaching of sexual orientation’ in schools without parental consent; the ‘promotion of sex reassignment therapy’ for children; the exposure of children to ‘sexually explicit media content’; and showing ‘media content on gender-changing procedures’ to minors.

For a year, Orban’s populist government argued that the EU has withheld RRF funds due to the controversial legislation. This argument was debunked by former EU commissioner and minister for regional development, Tibor Navracsics, in a recent interview.

The EC took Hungary to court over Klubradio, the last independent radio station, with national coverage, that lost its broadcasting licence in 2021.

EU rules require radio frequencies to be assigned "on the basis of objective, transparent, non-discriminatory and proportionate criteria". The radio’s application for spectrum was rejected "on highly questionable grounds," the Commission said.

Justice Minister Judit Varga noted that the decision was taken by an authority independent of the government and upheld by an independent court.

The European Commission also launched an infringement procedure against Hungary over a measure requiring prior notification of cereal exports and giving the state pre-emption rights. The government earlier said the notification measure had achieved its goal of preventing a big increase in grain exports amid higher global demand, thus ensuring domestic supply. Hungary has two months to respond to the EC on the matter.

As expected, the decision that only Hungarian-registered vehicles are allowed to fill up their tanks at regulated prices also triggered an infringement procedure. Foreign motorists had to pay the market price for fuel since late May, while Hungarians pay HUF480 per litre. The price cap was recently extended until October.

The government argued that it wanted to end fuel tourism that threatened supply. Analysts warned of fuel shortages in the peak season as MOL is planning to carry out maintenance work at its Danube refinery near Budapest next month.