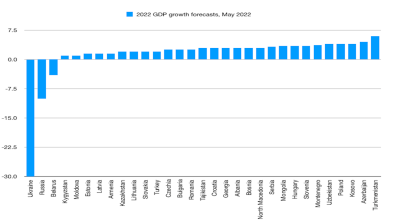 The European Bank for Reconstruction's latest projections for 2022 show a deep 30% contraction in Ukraine. / EBRD
By Clare Nuttall in Marrakesh May 10, 2022

A severe contraction now expected at 30% this year in war-torn Ukraine has dragged down the European Bank for Reconstruction and Development's (EBRD) projection for growth across its area of operations in 2022 to just 1.1%.

The development bank has issued two new sets of projections since Russia invaded Ukraine in February, which has had a negative impact across most of the emerging Europe and southern and eastern Mediterranean (Semed) regions.

In its latest Regional Economic Prospects report issued on May 10, the EBRD has lowered its forecast for the region as a whole by 0.6 percentage points (pp) compared to its previous projections in March, and by 3.1pp compared to November 2021.

At the same time, the development bank warns of soaring inflation in the region, exacerbated by the disruption caused by the war and related sanctions on international energy and food markets.

While it is the expected deep contraction in Ukraine that is mainly dragging down the headline figures, a number of economies across the region have also had their projections lowered, as the effects of the war spread.

“Only last November we were predicting growth of 3.8% across our regions for this year. But at the time we described last year’s recovery and its momentum into 2022 as bitter sweet, tainted by worries over high commodity prices,” says EBRD chief economist Beata Javorcik. 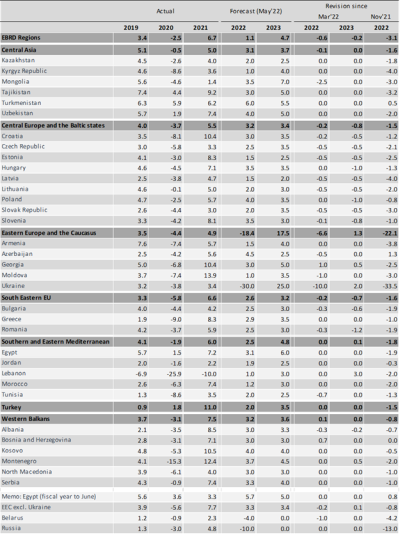 Given the extreme uncertainty of the geopolitical situation, the EBRD warns that all of its current set of forecasts are vulnerable to major downside risks, should the scale of the war expand or if the flow of exports of gas or other commodities from Russia is restricted further.

For example, more disruptions to gas supplies could lower the output per capita in the EBRD regions in 2022 by 2.3% lower than its baseline scenario.

For the moment, the EBRD is forecasting a strong rebound to 25% growth for Ukraine next year. However, it adds, “this assumes that substantial reconstruction work is by then already underway. How long the hostilities last, the shape of any post-war settlement, the extent of reconstruction and how many refugees return home will also influence the recovery’s speed.”

Across the EBRD regions, inflation soared to 11.9% in March, the month after the invasion, which is close to the peak recorded during the international financial crisis in late 2008.

“Oil prices are elevated and gas prices in Europe are above historical highs and around four times the level in the United States, putting European producers at a disadvantage.

“Prices of wheat, corn, soybeans and other agricultural commodities have also risen rapidly,” the EBRD says.

“Many economies in the EBRD regions are highly dependent on gas in their energy mix, while some economies in the Caucasus and southern and eastern Mediterranean rely heavily on wheat imports and have historically sourced wheat from both Russia and Ukraine,” adds the report.

The fastest growing economies in the region this year are expected to be Turkmenistan and Azerbaijan, both gas-rich nations. The report notes that Turkmenistan "stands to benefit from elevated gas prices and its ‘splendid isolation’ – from Russia and global capital markets". Azerbaijan, meanwhile, is the only country in Eastern Europe and the Caucasus "that is likely to benefit from current energy sector developments, at least in short term, due to its status as a major hydrocarbons exporter and one of the potential alternative (to Russia) gas suppliers of Europe".

Aside from energy, the EBD lists the importance of Russia, Ukraine and to a lesser extent Belarus – also the target of western sanctions – on international agriculture markets. Both Ukraine and Russia are major exporters of agricultural commodities, together accounting for almost 70% of global exports of sunflower oil in 2019 and almost 30% of global wheat exports. Meanwhile, Belarus and Russia are major exporters of fertilisers and fertiliser ingredients such as ammonia and potash.

The burden of rising food and energy prices falls disproportionately on poor counties and households. “[A]s we well know, poorer households suffer even higher rates of inflation than others because food and energy account for a larger share of their domestic budgets,” said Javorcik.

According to the EBRD, spending on utilities accounts for over 20% of household income in Romania, Armenia and Moldova, against around 7% in Germany. And while food accounts for 15% of the consumer price index in Germany, it is as high as 30-37% in Jordan, Morocco, North Macedonia, Romania and Serbia.

Impact through trade and tourism

While the expected contraction in Russia is considerably smaller than in Ukraine, as the largest economy in emerging Europe this has a broad impact in the region.

“Besides the impact of high food, energy and metals prices, some economies in the EBRD regions are also vulnerable thanks to trade, tourism and migration-remittance links to Russia,” the report says.

“Russia is an important trade partner for some economies in the Caucasus and to a lesser extent in the Baltics and Central Asia,” it added.

In Central Asia, growth is expected to slow to 3.1% this year, though the only forecast to be lowered in May was Mongolia’s, by 2.5pp. This reflects “the resurgence of COVID-19 in China resulting in additional border restrictions”, the report says.

The EBRD’s Eastern Europe and the Caucasus region that comprises the three South Caucasus counties plus Moldova and Ukraine is dragged down by the sharp contraction in Ukraine; excluding Ukraine, the region is forecast to grow by 3.3% in 2022 and 3.4% in 2023. The EBRD cut its 2022 forecasts for Azerbaijan by 0.5 pp and for Moldova – seen as vulnerable to a spillover of the conflict – by 1.0 pp.

On the other hand, Georgia’s growth forecast was lifted by 1.0 pp for 2022 and 0.5 pp for 2023. This follows its stronger-than-expected recovery in 2021 and strong support from international development partners. In addition, initial currency depreciations in Georgia (and Kyrgyzstan) have been reversed.

The downward revisions since March reflect higher food and energy prices and supply chain disruptions. “Economies in Central Europe are also closely integrated in manufacturing supply chains with Ukraine. For instance, owing to lack of deliveries of parts from Ukraine, a number of car factories had to partially or fully suspend production and look for alternative suppliers as hostilities escalated,” the EBRD report says.

Looking at Southeast Europe, GDP in the EBRD’s South-Eastern European Union region (Bulgaria, Greece and Romania) is expected to grow by 2.6% this year and 3.2% in 2023, after downward revisions for Bulgaria and Romania. The forecasts for Croatia and Slovenia (included in the EBRD’s Central Europe region) have also been lowered modestly.

The rebound of the tourism sector started in 2021, when small tourism-dependent economies such as Croatia, Georgia and Montenegro were among the fastest growing in the region.

However, tourism in the region is likely suffer as a result of the war and related sanctions. As the EBRD points out, in 2019, spending by Russian tourists provided between 1% and 2% of GDP in Estonia, Montenegro and the South Caucasus countries.

The EBRD has not amended its forecast for Turkey’s growth in 2022 or 2023; the country’s economy is predicted to grow by 2% this year, supported by a modest recovery in net exports, the development bank says. Growth is then set to accelerate to 3.5% in 2023, not least because of a pre-election expected hike in government spending.

Hapless Mongolia struggles with a shortage of dollars

Romania’s GDP increased by a real 6.5% y/y in the first quarter of the year, surprising analysts who had expected more damage from the war in Ukraine.

Full-year economic growth forecast at around 5% despite Ukraine-driven slowdown.

Russia’s CBR reserves down $43.7bn since the start of the war
54 minutes ago
Russians trade TV news for social media as war-weariness sets in
1 day ago
Net FDI in Bulgaria jumps four times y/y through March to €1.05bn
1 day ago
Romania puzzles analysts with robust 6.5% GDP growth in Q1
2 days ago
Poland’s GDP expands 9.1% y/y in Q1, brightening outlook for the year
2 days ago