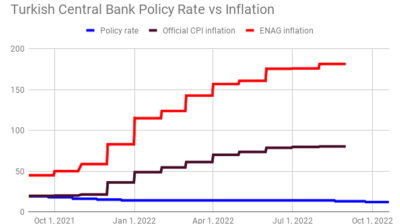 The head of the European Bank for Reconstruction and Development has reportedly raised concerns with Turkish authorities over Ankara’s "outlier" policy of attempting to drive economic growth with low interest rates.

Odile Renaud-Basso, president of the EBRD, spoke to Reuters on October 7 in Istanbul after meetings that she described as "frank and transparent" with Turkey's Finance Minister Nureddin Nebati and Sahap Kavcioglu, the country’s central bank governor.

"I expressed some question marks about the fact that it [the policy] creates inflation, with the high level, and it is not necessarily the best environment for long-term investment," she said in an interview at the EBRD’s headquarters in Turkey, the development bank’s largest market.

The next day, however, at a rally, Turkish President Recep Tayyip Erdogan, in the early stages of a re-election campaign, showed no sign of rethinking his unorthodox ‘Erdoganomic’ policy of delivering more and more monetary stimulus despite official inflation standing at 83% and the collapse of the Turkish lira, which lost 44% against the dollar last year prior to shedding another 28% this year to date—in fact Erdogan, addressing a crowd in the western province of Balikesir, appeared to be doubling down on the policy, saying: "As long as this brother of yours is in this position [as Turkey’s leader], the interest will continue to fall with each passing day, each passing week, each month."

With Turkey’s benchmark rate cut to 12% in September versus the 19% it stood at a year ago, Turkey underlined its reputation for having the highest negative real interest rates in the world. The lira has continued to sink, while there is no sign of the monetary policy making any telling impact on the country’s chronic current account deficit, especially given the energy crisis that has driven up Turkey’s oil and gas import bills.

"It's quite an outlier strategy," Renaud-Basso added in her interview with Reuters, discussing Turkey’s monetary approach. "I don't know whether it can work or not. But it creates some challenges in anchoring inflation expectations and creating a secure and stable environment."

The Erdogan administration’s latest economic programme, adopted in September last year, brought risks of further lira depreciation and a further depletion of FX reserves, leaving the country in need of a way to finance its current account, she reportedly also noted, stating: "This can create a high level of uncertainty," she added. But, said Renaud-Basso, the authorities "are convinced that their policy is the right one."

The EBRD chief was also reported as observing that Turkey's private sector and its export capacity were "very resilient", while the country was gainingd as supply chains rebase from China. But the situation moving ahead would depend on cooling demand in Europe, Turkey’s biggest export market, she said.