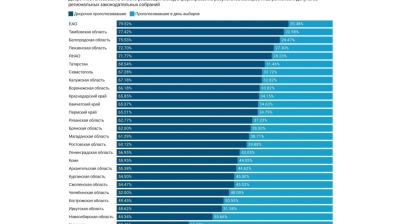 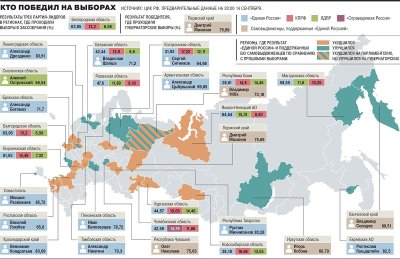 As bne IntelliNews has reported, the opposition scored a few successes in the vote to elect over a dozen governors and members of regional and city councils, but the vast majority of races were won by the incumbent ruling party, United Russia. The poll was seen as a dry run of the Kremlin’s political machine ahead of the crucial 2021 parliamentary elections.

Following changes to the constitution voted through earlier this year, a new system was introduced that allows voters to vote early online. The system has been heavily criticised, as it makes ballot stuffing much easier and Belarus' self-appointed President Alexander Lukashenko used the same system of early voting to massively falsify the results of the presidential vote in his country on August 9, in cheating that was evidenced by a statistical study of the results.

“In Russia, in the majority of regions where there were regional and local elections on 13 September, the reported "early voting" (dark blue in chart) contributed over 50% of total reported turnout. "Early voting" is used as a method of electoral rigging,” tweeted Alex Kokcharov, a political analyst at IHS Markit.

Early voting was one of several tricks used by the Kremlin to ensure it kept a grip on power in the regions. In one hotly contested race in Novosibirsk, the opposition managed to break United Russia’s control over the city council. Sergey Boyko, a member of anti-corruption blogger and opposition activist Alexei Navalny’s opposition movement, won the election to head the council.

However, United Russia eventually took control of the council after several “independent” candidates decided to join the United Russia fraction after the results were announced.

“In Novosibirsk, Russia, the ruling United Russia party won only 23 out of 50 seats in the city council. But it is likely to keep majority in the city council as several "independent" candidates decided to join UR faction, which will have 27-29 members,” Kokcharov added.

The Communist Party of the Russian Federation (KPRF) was the main contender in the regional elections as the only opposition party with a large grassroots political organisation. However, its candidates were excluded from several races on technical grounds. The party said it will challenge the results in those races.

MEP Jozsef Szajer, one of the founders of Hungary's ruling conservative Fidesz, tried to flee down a drainpipe when police broke up the illegal gathering of 25 men including several diplomats.

Quarter on quarter gain is 15.6%. Loose policy sent lira back into depths of crisis and attempt to fix situation plus recognition of true extent of country’s COVID-19 emergency set to brake economy in Q4. Trade deficit is widening.

Efforts continue in the hope of enabling Sofia and Skopje to resolve their differences but diplomats don't expect a breakthrough before the European Council meeting in December.