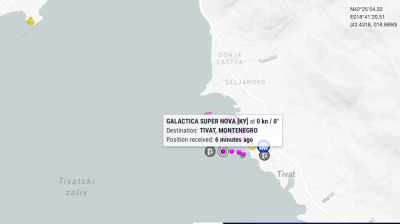 Mans, a Montenegrin anti-corruption NGO, has appealed to the government in Podgorica to take action to prevent the country becoming a haven for sanctioned oligarchs after Lukoil CEO Vagit Alekperov’s superyacht was spotted heading for the country.

In the days since Russia invaded Ukraine on February 24, the European Union, the US and other western countries have slapped increasingly tough sanctions on Russia.

In the latest development, the European Union froze the assets and imposed travel bans on another 26 Russian nationals, including six of Russia's most prominent oligarchs with close ties to the Kremlin and President Vladimir Putin.

Not only have the sanctions imposed so far wiped tens of billions of dollars off the net worth of Russian billionaires, as the Russian stock market collapsed, the US has said it will seize assets of Russian oligarchs, including yachts and mansions. Meanwhile, France is drafting a list of those assets.

Now, the luxury yachts of Russian oligarchs are on the move in the hope of avoiding seizure of these assets as the US is imposing more sanctions on their property due to the war in Ukraine, CNBC reported on March 1.

CNBC said it reviewed data from Marine Traffic showing at least four massive yachts owned by Russian business leaders have been moving toward Montenegro and the Maldives in recent days.

The latest data on the Marine Traffic site shows that the Galactica Super Nova, owned by Alekperov, is at the port of Tivat. Alekperov also owns 36.8% of the football club Spartak Moscow.

In response to the CNBC report, MANS urged the government to prevent any attempt by Russian oligarchs to hide their yachts in the country.

“Today, MANS called on the government of Montenegro and the relevant ministries to inform the public without delay about the specific measures they will take so that Montenegro's territory does not become a safe zone for hiding the assets of Russian oligarchs who are under attack or are just threatened with international sanctions,” MANS said in a statement.

Podgorica has said that it will join the EU sanctions against Russia due to the war it started in Ukraine but still has not revealed details of its specific steps.

Montenegro has long been a popular destination for Russian tourists, that at one point earned the country the nickname ‘Moscow-on-Sea’. The construction of high-end resorts like Porto Montenegro have kept the Russian super rich coming, despite a souring of relations between Moscow and Podgorica in the run-up to Montenegro’s Nato accession.